Speaking on the All Together Now podcast, Tony Scott has slammed Everton ace Andre Gomes after a rare league start last weekend.

Gomes hadn’t started a game in the Premier League since 8th February, which was a crushing 3-1 away defeat to then-relegation rivals Newcastle United, racking up just 47 minutes of top-flight football since.

Frank Lampard decided that it was time for him to unleash the ex-Barcelona midfielder against Brentford – a team he faced earlier this year in the FA Cup, featuring for the full 90 minutes.

However, after managing just 14 passes and 25 touches in 74 minutes on Sunday (as per FBRef), it appears to have been the wrong decision.

Has Andre Gomes been an Everton flop? 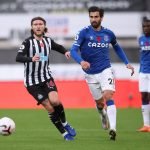 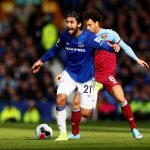 This latest display from Gomes led Scott to slam the midfielder and claim he doesn’t belong in the Everton team or even the Premier League.

“He probably belongs in Spain now, doesn’t he, or Italy – somewhere where it’s less aggressive where you can just basically have the time on the ball to do what you want, I think that’s where he belongs. I think yesterday [Sunday], he was just found wanting, especially when we went down to 10 men.”

It’s safe to say that the Portuguese midfielder has certainly not lived up to expectations that arrived with him when he swapped Barcelona for Everton, only managing 99 appearances since joining back in 2018 and registering just two goals and seven assists in that time.

With his contract not set to expire until the summer of 2024, this upcoming transfer window could be the best time for the Toffees to cash in on the midfielder, but with wages of around £112,000 (according to Spotrac), finding a club willing to pay those wages as well as a transfer fee could be easier said than done.