The Brazilian grabbed the winner as the 18th-placed Toffees picked up a huge 1-0 victory over Chelsea last Sunday but was taken off in the 80th minute with fear that he may have sustained an injury.

He is the club’s leading scorer this term having bagged nine Premier League goals and would be a huge loss if unavailable for Frank Lampard with his team staring at an unthinkable relegation to the Championship. 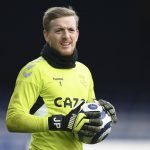 However, Dinnery has offered a positive update in the wake of the Goodison Park outfit’s pivotal run-in.

(10:27) “Good news with regards to Richarlison in the first instance, if you missed it. His withdrawal last weekend was fatigue-related, it was cramp, but the Brazilian is also carrying a little bit of an ankle knock or a sprain that he picked up in the Merseyside derby.  Nothing serious he has played on it can be strapped up.

The 24-year-old has been involved in over a third of Everton’s Premier League goals this season, scoring four in his last five games and it is paramount for the club’s hopes of survival that he is fit for selection.

Despite question marks surrounding his future, the 34-capped international continues to inspire his teammates with his “very hard-working” persona as described by compatriot Allan.

His presence in the team is a necessity if Everton are going to clamour their way to safety and the latest update from Dinnery should be music to supporters’ ears.

AND in other news, ‘He fancies it’ – Insider has been ‘told’ name of early ‘favourite’ for potential Everton job