The Magpies have been training at their Benton base for years now with very few upgrades coming, and only a few years ago players were using green wheelie bins as ice baths, such was the neglect Mike Ashley had towards the club he owned.

Are you excited about this new training ground?

Newcastle fans would have been dreaming of fighting at the top of the table and signing star players in the future when PIF bought the club, however, something that most knew needed to improve was the training ground, with Amanda Staveley labelling it awful, which is extremely damning given they’re a Premier League club.

While a new training ground said to still be in the long-term plans, it’s been found out and reported that PIF and Newcastle have submitted plans to the North Tyneside council to build and improve on their current base at Benton, with the plans looking to modernise the camp with hydrotherapy pools, better offices for managers and coaches and a gathering area for the players. 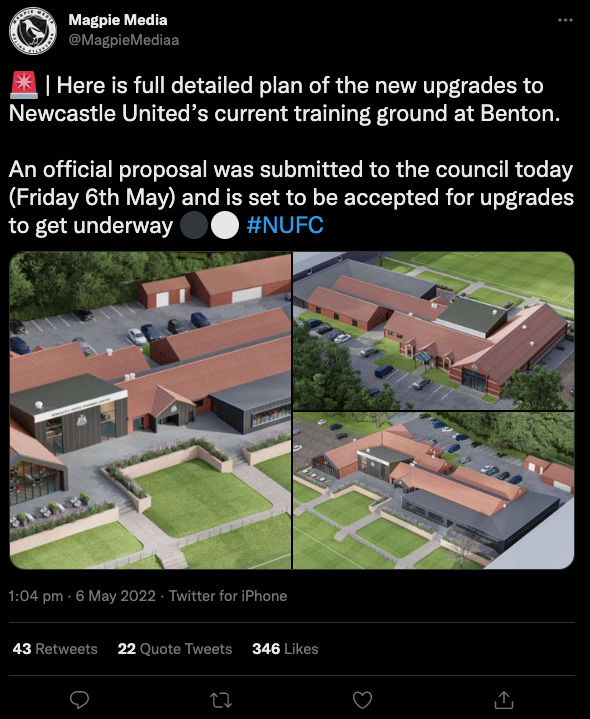 These plans may still make the training ground look outdated and out of place compared to the likes of Tottenham Hotspur, Brighton and Leicester City but it certainly brings the club closer to the modern-day as their current base is a very old looking building now.

With Newcastle set to be competing for the signatures of some top players this summer, being able to show plans in motion to improve the club from the ground will only enhance their chances of landing these targets who could grow with Newcastle and be on this journey with them.

In other news: ‘He might want to go’ – Callum Wilson drops bold verdict on reported NUFC target