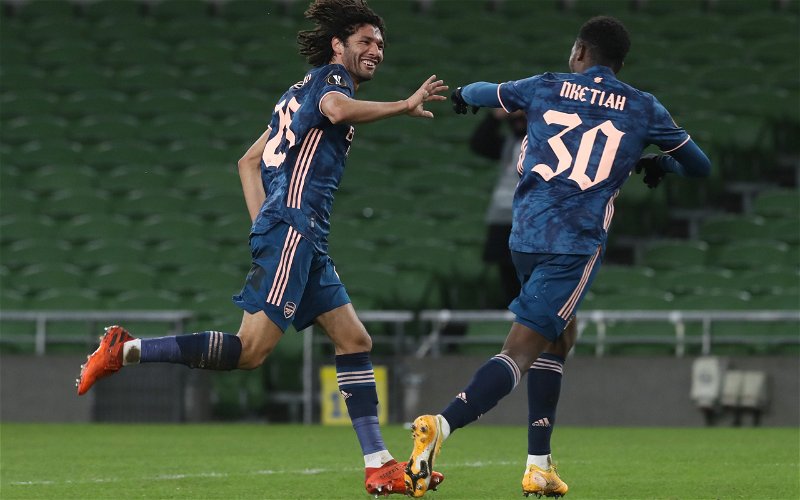 Arsenal podcaster Dan Potts fears Mohamed Elneny and Eddie Nketiah will be offered new contracts at the Emirates Stadium and instead wants them to be replaced.

Elneny and Nketiah are out of contract at the end of the season. Although no deal is currently on the table, the former has expressed his desire to stay with the Gunners, while Nketiah has reportedly already told the club he wants to leave at the end of the campaign.

Writing on Twitter, Potts expressed his desire to see the two replaced, but fears the hierarchy may go down a different route. He said, “We need upgrades to Eddie and Elneny in the summer but I have a feeling they will both sign contract extensions…..”

TIF Thoughts on Nketiah and Elneny

Will Nketiah and Elneny stay at Arsenal?

This would come as a big twist as Nketiah has rejected numerous contracts and is still undecided on his future, whilst it has also been claimed that Elneny will be off at the end of the season.

The duo have now been at Arsenal for a considerable amount of time. Nketiah came through the club’s youth system after being let go by Chelsea earlier on in his career, while Elneny has spent six years in north London since transferring from FC Basel in 2016.

Nketiah has earned more game time this season due to the departure of Pierre-Emerick Aubameyang. However, despite scoring five goals in five League Cup games, he has only found the back of the net twice in 17 Premier League outings. Elneny, meanwhile, has played just 13 times in all competitions, and has been overtaken by others in the pecking order.

Both players cannot be relied upon week-in, week-out by Mikel Arteta. They earn a combined £66,000-a-week currently at Arsenal – that is money that could be put to good use elsewhere.