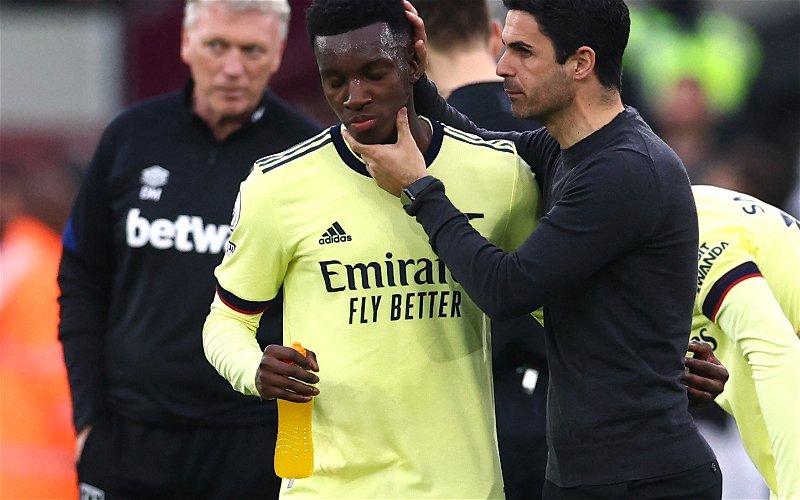 Arsenal are “pushing” to tie down striker Eddie Nketiah to a new contract due to his performances towards the end of the season.

The £9m-rated striker has made only five starts for the Gunners this season but they have come in each of the past five games and he has taken his chance scoring four goals to propel Mikel Arteta’s side to the verge of Champions League football.

However, his £17k-per-week contract is set to expire in the summer with Arsenal writer Charles Watts already saying that he has chosen to leave the club.

Romano has now revealed that the north London outfit are working to extend the 22-year-old’s deal.

Speaking on the Gazzetta Dello FIVE YouTube channel he said:

“It is not easy because in January many Bundesliga clubs and Premier League clubs like Crystal Palace and West Ham approached him but now he’s playing and so he is tempted by this Arsenal possibility. “

TIF Thoughts on Nketiah and Arsenal

Until recent weeks, Nketiah, who Arteta has described as ‘extraordinary’, had struggled for game time but he has proved his worth bagging a brace in a huge win at Chelsea while also posting an 8.6 match rating and scored both goals as the Gunners picked up another three points at home to Leeds on Sunday.

His uplift in form is why his current employers don’t want to see him leave for a free but perhaps the writing is on the wall and he has mind made up.

The capture of the reported target Gabriel Jesus wouldn’t help with the guarantee of game time either so it could be chasing a lost cause for Edu and company.