Newcastle United fans will be in love with this latest footage to emerge live on Sky Sports of Eddie Howe.

The Magpies may have been hoping for some positive injury news from Howe’s pre-match press conference, however, the manager has confirmed that he doesn’t expect to have Kieran Trippier or Callum Wilson back and available for this weekend’s clash against Liverpool – though both are ‘closer’ to returning to the fold.

Trippier and Wilson have been long-term absentees from Howe’s squad with the former suffering from a broken bone in his foot, whereas Wilson has been struggling with a muscle problem in his leg, but now with Newcastle all but safe, there would be no reason for either of them to be risked.

While Howe may not want to risk the duo if there is a doubt they could pick up another injury, he couldn’t hide his clear delight that the pair of them are nearing a return to first-team action as he revealed that news during his press conference. 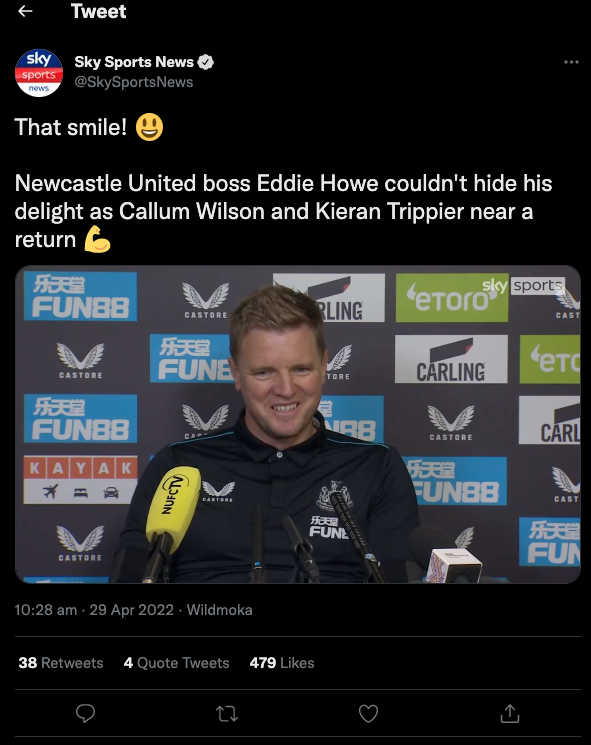 Howe’s beaming smile will be how the majority of people on Tyneside will be feeling knowing that Trippier has had a training session on the grass with the rest of the team and that Wilson is also edging ever closer to a return.

Fans will be delighted because Wilson is still their top scorer, so if they can get him back, their form and fortunes in front of goal would likely increase even further, as Chris Wood hasn’t hit the same heights with just two goals despite their great recent run.

Meanwhile, Trippier was a big-name January signing and is unbeaten in the Premier League since joining the Magpies, so his influence on the team can’t even be debated.

In other news: Blow for Howe: £16.2m-rated star now ‘unlikely’ to play vs Liverpool – journalist