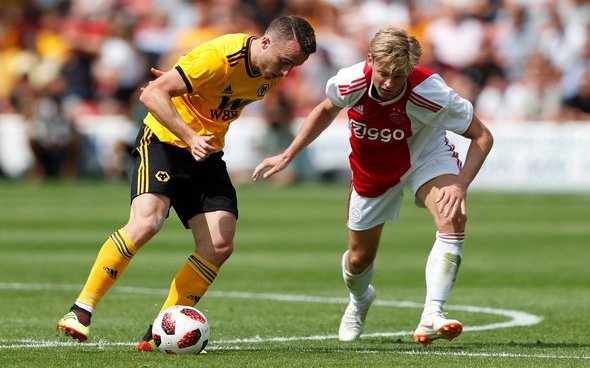 Journalist Pete O’Rourke has claimed that Frenkie de Jong would be a big upgrade for Manchester United in midfield.

It was recently announced that Erik ten Hag will take over as Manchester United manager for next season, and he may looking to bring in some new players in the summer to strengthen the squad after what has been a disappointing season. United have struggled this term in the Premier League and a place in the top four is slowly becoming out of reach.

De Jong is reportedly not happy with his current situation at Barcelona and Ten Hag is thought to be keen on reuniting with the Dutch midfielder at Old Trafford next season.

With Ten Hag and De Jong previously working with each other at Ajax, O’Rourke highlighted to GiveMeSport the success that the duo had in the past and noted how much of an upgrade he would be for United.

He said: “I’m sure Ten Hag will be monitoring his situation. They’ve enjoyed success together in the past, and de Jong would be a big upgrade in that Man United midfield if they were able to sign him.”

With De Jong supposedly unhappy with the current state of Barcelona, it will be interesting to see where he ends up next season. With Manchester United interested in him, Ten Hag may be the man to finalise the deal for him at Old Trafford.

De Jong is currently valued at £63m by Transfermarkt, it could be argued that it will take a big fee to be lured away from Barcelona. At just 24 years old, De Jong has already made 303 senior appearances, so he would come to Old Trafford with plenty of experience and still have time to progress as a player, so it is easy to see why joining forces with Ten Hag at Manchester United would appear an attractive proposition for all concerned.