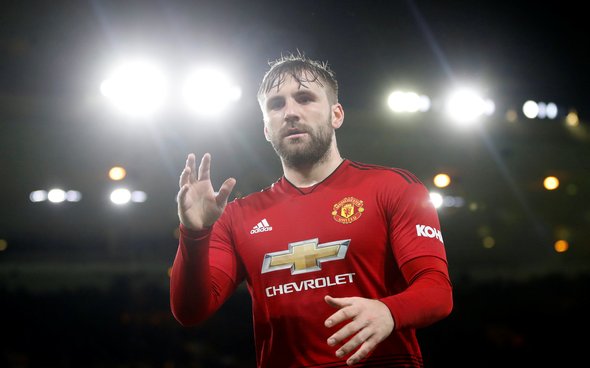 Injury specialist and Sky Sports contributor Ben Dinnery has claimed that there are question marks as to whether Luke Shaw will play again this season for Manchester United.

When Luke Shaw was enduring his first game back for Manchester United since February against Leicester City at the start of the month, he was unfortunately forced off at half-time due to injury, and he is set to be out of action for the foreseeable future.

Manchester United have struggled again this season, but they still have a chance to qualify for the Europa League ahead of next season as they sit 6th in the Premier League standings, just three points off Tottenham Hotspur, who currently sit 5th.

United have leaked goals this season, conceding 52 goals in total in the Premier League, and the defensive issues have just got worse as Dinnery claimed on the Premier FPL Injuries YouTube Channel that Shaw may be out for the rest of the season.

He said: “Long-term absentees are those who are in the treatment room already – none of those are expected to return and that rules out Luke Shaw; questionable whether he will return this season.”

Shaw has been somewhat out of form this season for Manchester United in the 20 Premier League appearances that he has made. He has the 14th-highest match rating in the squad (6.88), has the 14th-most tackles per game (1.1) and the 12th-most clearances per game (1.8), as per SofaScore.

Although those stats don’t make great reading, he will still be a loss to Ralf Rangnick, as the United manager will have wanted as many players available to him as possible as we head into the final stretch of the season.

Also on a personal note, after the appointment of Erik ten Hag, the Dutch manager may be looking at the current squad and planning his side for next season, so the absence of Shaw could give Alex Telles the chance to prove himself, and Ten Hag may opt for the Brazilian as his first-choice left-back if he performs well in the remainder of the campaign.