Manchester United: Supporters will be shocked as surprising stat emerges 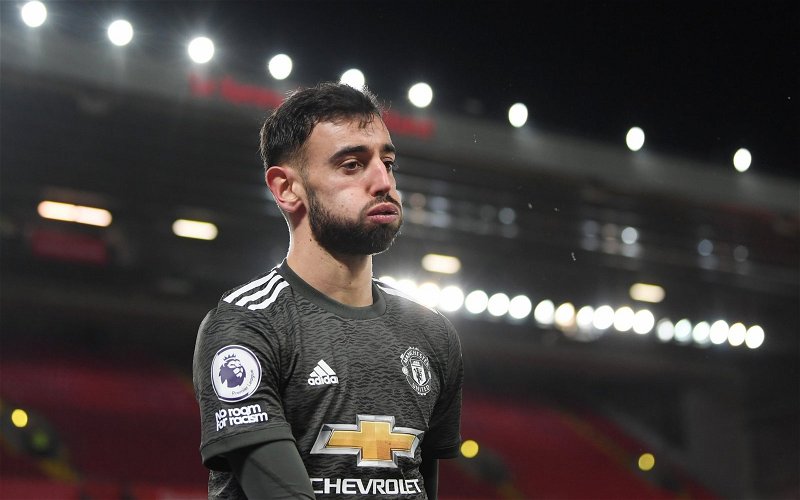 Manchester United supporters surely will not believe a Bruno Fernandes stat that has emerged, which suggest the midfielder has played rather well this season despite the poor form of the team overall.

The Red Devils have struggled all season under former boss Ole Gunnar Solskjaer and now Ralf Rangnick, as despite sitting sixth in the table, their chances of qualifying for the Champions League seem very slim.

Currently four points behind Spurs in fifth and six points off Arsenal in fourth, it looks more and more likely the legendary Premier League team will finish the season without any silverware or top-tier European football for next season.

While the entire team has been subjected to a lot of criticism during the season, attacking midfielder Bruno Fernandes has taken his fair share individually, including being slammed by former Arsenal player Paul Merson, who said he was ‘flabbergasted’ that the Portuguese international received a contract extension and criticised him for ‘throwing the hands up’ and ‘moaning at everyone when he doesn’t get the ball’.

However, in the wake of United’s awful 3-1 loss to Arsenal which has all but finished Champions League challenge, a surprising stat on Twitter (via Amazon Prime Video Sport) has indicated Fernandes has actually played well this season, having created the most chances out of everyone in the Premier League with 86 – beating the likes of Trent Alexander-Arnold (83), Kevin De Bruyne (71), and Bukayo Saka (62).

While United have disappointed everyone this season with a number of players proving they are not up to the task of playing for a legendary club like the Manchester outfit, Fernandes has not been one of these. He does show his emotions on the pitch and can sometimes fall asleep in games, especially defensively, but there is no doubt that on his day he is one of the best players on the pitch for Rangnick’s team.

So far this season the former Sporting Lisbon man has racked up nine goals and 14 assists across all competitions as well as averaging 2.2 shots, 2.6 key passes, 0.7 dribbles, one cross, and 3.2 long balls per game with 79% pass accuracy on 47.2 average passes per game (WhoScored).

While he has dropped off his 20/21 form which saw him boast an incredible 28 goals and 17 assists in all competitions, he has been one of the best players for United this year behind Cristino Ronaldo. The £81m-rated midfielder might just need a new manager to rejuvenate his form, and hopefully, for United fans, Erik ten Hag can be that man.