Manchester City: Journalist tips winger to leave in the summer despite Jesus rumours 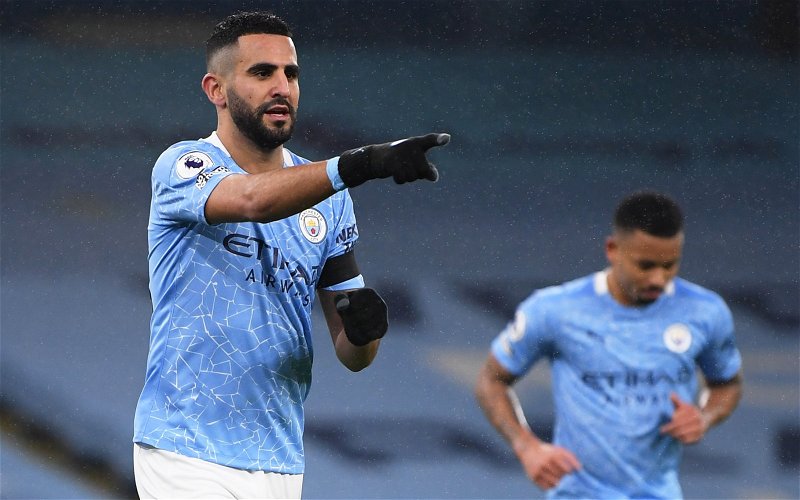 Journalist Dean Jones has claimed that Manchester City may look to offload Riyad Mahrez in the summer rather than Gabriel Jesus.

Mahrez has been a regular in the Manchester City side this season, featuring in 43 appearances under Pep Guardiola in all competitions, including 25 times in the Premier League, where he has scored 11 goals and assisted five times.

Gabriel Jesus has been linked with a move away from Manchester City, with the Brazilian having started just 17 Premier League games this season, while City have been heavily linked with Erling Haaland ahead of the summer transfer window.

Despite Jesus being linked with a move away from the Etihad, Jones claimed to GiveMeSport that Mahrez would be more likely to leave the club in the summer rather than the striker.

He said: “If someone from the frontline was to move on, I’m told that Mahrez is the one they might be more open to losing.”

Mahrez is valued at £36m by Transfermarkt and has been impressive in terms of stats this season. In the Premier League for Manchester City this term, he has the fourth-highest average match rating (7.32), the second-most goal contributions (16) and is their joint-top scorer with 11 top-flight goals, as per SofaScore.

Although Guardiola has a lot of cover in the wide areas, with Phil Foden, Jack Grealish and Raheem Sterling, it would be a big loss if City were to let Mahrez leave in the summer, judging by the stats he has produced this season.

Mahrez is someone that Guardiola has featured heavily in the big games, making 11 appearances in the Champions League this term and having the highest average player rating at the club in the competition (7.66).