Liverpool: Oxlade-Chamberlain’s Reds future could be in doubt as rumours emerge 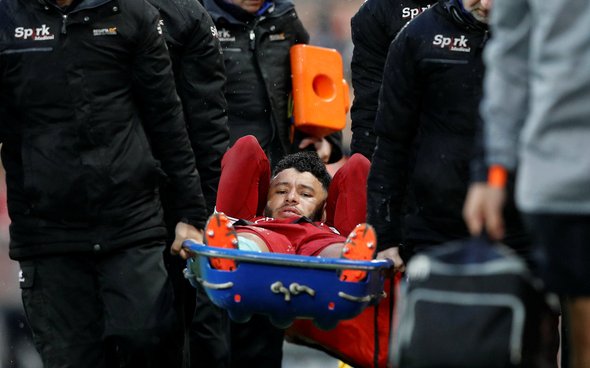 With already existing question marks surrounding the future of Alex Oxlade-Chamberlain at Liverpool, fresh rumours surrounding the signing of another central midfielder could bring a close to his chapter on Merseyside.

The Mail is reporting that the Reds are admirers of Monaco enforcer Aurelien Tchouameni, with Jurgen Klopp – now staying at the club until 2026 – a fan of the 22-year-old.

If a move were to materialise, Oxlade-Chamberlain could find himself further down the pecking order and wanting out – TIF will explain why…

The Englishman arrived at Anfield back in 2017 in a £35m deal from Arsenal and made 32 Premier League appearances during his first season, scoring three goals and creating a further seven.

He also netted a memorable goal against Manchester City in a Champions League quarter-final the following season, but suffered a serious knee injury a couple of weeks later, which stagnated his progress.

He missed over a year of football as a result and watched on as new signings Naby Keita and Fabinho settled in. Upon his return for the 2019/20 season, he made 43 appearances but only 25 were starts – 17 in the league.

Just as it looked as if he would work his way back into the frame, the 35-cap international suffered another injury setback which limited him to just 244 minutes in the English top-flight last season.

The three-time FA Cup winner has only featured three times for his country since his initial cruciate ligament rupture, with his most recent Three Lions appearance coming in November 2019.

And despite an injury-free campaign this term, he has managed just 17 Premier League appearances – including nine from the start, with his number of minutes on the field almost halved from his initial season on Merseyside.

At 28, there is still time for the former Southampton and Arsenal player to revive his career and get back into Gareth Southgate’s thinking, but with the latest reports, you would only assume that is possible if he were to look for pastures new away from Anfield.

With the emergence of Curtis Jones and Harvey Elliott as well as Thiago’s arrival, Oxlade-Chamberlain has found himself surplus to requirements on numerous occasions this season.

He has been an unused substitute 17 times by Klopp and has played the fifth-most minutes among Liverpool midfielders in the league, behind Jordan Henderson, Fabinho, Thiago and Keita.

The £16.2m-rated man has managed just one more start than Jones in league games and his tally no doubt benefited from Elliott’s ankle injury that saw him miss most of the campaign after starting three of the first four matches in the division.

With his contract up at the end of next season, the signing of Tchouameni could well be the final straw for Oxlade-Chamberlain.

The combative midfielder has been described as an ‘enormous’ talent by French national team coach Didier Deschamps and would perhaps be an incredible long-term replacement for club captain Henderson.

Capable of operating as a defensive midfielder and in a more advanced position, the French powerhouse could well be the successor to the number six role and further push Oxlade-Chamberlain out the door in the process.

AND in other news, ‘He’s the weakness’ – Pundit slammed £72m-rated Liverpool star