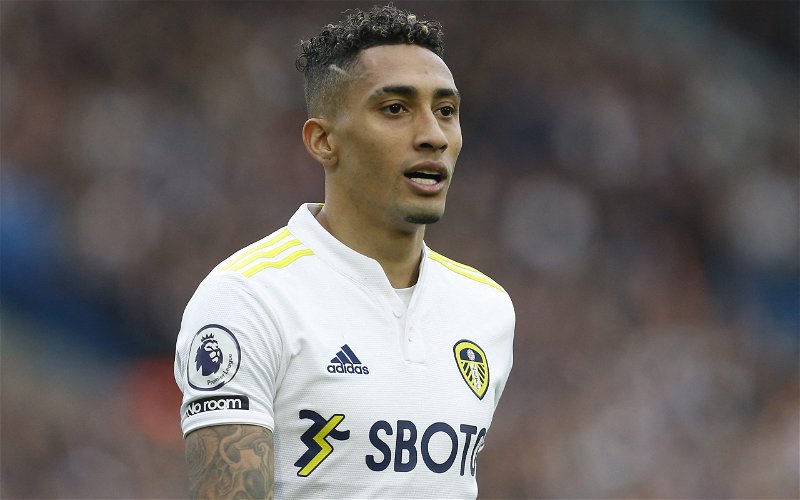 Former Leeds United goalkeeper Paul Robinson believes the Whites should sell Raphinha after Fabrizio Romano revealed the Brazilian and his agent are in advanced talks in regard to a move away from Elland Road.

Raphinha has impressed since making the move to Yorkshire from Rennes last season, amassing 15 goals and 12 assists in 59 games for the club.

However, as per Romano, the winger could be on his way out in the summer, with Barcelona said to be in ‘advanced talks’ with Deco, his agent, since February. The journalist also added Raphinha has two release clauses in his contract – he can leave for £75m if Leeds stay in the Premier League, while that fee would drop to just £25m if the Whites are relegated.

Speaking to MOT Leeds News, Robinson said Victor Orta and co should look to sell the 25-year-old. He explained: “I’d sell him, I’d let him go.

“I think the way that he’s performed and his attitude this season has been in and out.

“You know what a top-quality player he is and what a brilliant talent he is. But he hasn’t done it on a regular basis this year.

“I don’t think that would be a bad bit of business.”

Throughout what has been an anti-climactic second season back in the top flight, Raphinha has been one of Leeds’ few bright sparks. Nine goals and three assists for a side languishing towards the bottom of the Premier League table is not to be sniffed at.

However, there have been rumours he wants to move on to pastures new at the end of the season, with Sport even reporting he has told his representative to “do everything possible” to secure a switch to the Camp Nou.

Barcelona are said to have already lodged a bid of €35m (£29.3m), which would already represent a significant profit on the £17m Leeds parted with to capture his services, although that is less than his current £36m market value, as per Transfermarkt.

No matter how good Raphinha is, Leeds should look to move him on if he does not want to be at the club. That initial offer was rejected, with the English side pointing towards the relevant release clause. He is one of their most prized assets, and they must make sure they get what they deserve if he does move on.