According to Mundo Deportivo, Barcelona would be willing to let Francisco Trincao move to Leeds United in exchange for Raphinha.

Over the past few days, news has emerged of the Catalan outfit’s strong interest in the Brazil international, with Fabrizio Romano even revealing the player’s agent, Deco, has been in talks with Barca since February.

Romano also provided news on the 25-year-old’s release clauses – if Leeds stay in the Premier League, any interested party would need to pay up to £75m to capture his services, although that fee would drop to just £25m if the Whites were to be relegated. However, these claims have recently been challenged.

To sweeten any deal, Barcelona are said to be willing to let Trincao, currently on loan at Wolves, move to the Premier League side. But what are the potential consequences of such a deal? Read on to find out.

Although his attitude has been questioned at times, there is no doubting Raphinha’s ability. No other Leeds player has scored as many as his nine goals this campaign, while he found the back of the net six times and provided nine assists in the Premier League last term as well.

His departure would be a huge blow to Jesse Marsch, but at least the arrival of Trincao would provide the American with a replacement on the right flank.

With just one goal and one assist in 22 league outings this term, it seems he has not yet fully adapted to English football, but there are clearly reasons why Barca paid €31m (£26m) to Braga to take him to Spain.

He has also picked up seven Portugal caps, which is no mean feat given the competition for places in Fernando Santos’ squad. Although he is not yet at the level of Raphinha, there is no reason why he couldn’t evolve into an equally important player.

It is hard to know what to make of Barcelona’s financial struggles. During the summer, they appeared to be in total disarray, even unable to keep Lionel Messi, their best-ever player, at the club.

In January, however, they splurged £46.3m on Ferran Torres and also acquired Pierre-Emerick Aubameyang, Dani Alves and Adama Traore, albeit on free transfers and loans. However, a recent report reveals the Camp Nou outfit’s spending limit for the next transfer window stands at -€144m, which would allow them to spend just 25% of any savings they can make.

A part-exchange, therefore, would no doubt be appealing to Joan Laporta, and the fee paid for Trincao, plus his potential, would heavily reduce the cash fee Leeds would receive if they agreed.

The advantages of that, though, are more on Barcelona’s side than the Yorkshire outfit’s. After all, Leeds were unable to make a single signing during the winter transfer window, and given their disappointing results this term and the arrival of a new manager, a squad overhaul is potentially on the cards. For that, they would need as much money as possible, and Raphinha is perhaps their biggest asset.

Replacing Raphinha would be a challenge, and there is no doubt the arrival of Trincao would soften the blow. Still, the 22-year-old has plenty of room for improvement, and it remains to be seen whether Marsch would have the patience to allow him to develop at his own pace.

Would you take Trincao for Raphinha? 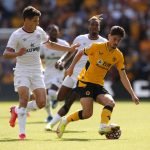 It would perhaps be worth Leeds looking abroad for a bargain, as they did with Raphinha. Victor Orta and co may well be poised to make a big profit on the £17m they paid Rennes in October 2020, and it may well be worth using any potential fee on a similar up-and-coming player when the time comes.