According to RMC Sport, Everton are one of a number of Premier League clubs interested in hiring Bruno Genesio, the current Stade Rennais manager.

Frank Lampard was only confirmed as the new Toffees boss on the final day of the January transfer window, but it seems the Merseyside club’s hierarchy may already planning for life without him.

RMC’s report does say that while a departure for Genesio is unlikely, it is not an impossibility, and Everton have joined Wolves and Tottenham Hotspur by registering an interest in the 55-year-old.

Who would you rather have as manager? 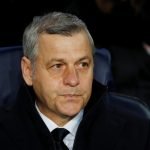 But what effect would the appointment of Genesio have on the Toffees moving forward? We take a look at the potential consequences.

Genesio has been compared to Pep Guardiola in the past, although perhaps somewhat mockingly given the discrepancies between their respective styles of play.

Ultimately, though, he has shown his desire to field attacking XIs and take games to the opponent. This season, no other side in Ligue 1 has scored more than Rennes’ 63, including league leaders Paris Saint-Germain, while Lyon finished in the top three French top-flight scorers in each of Genesio’s three full campaigns at the helm of the Auvergne-Rhone-Alpes outfit between 2016 and 2019.

Players such as Memphis Depay and Moussa Dembele thrived under their forward-thinking boss, just as Martin Terrier and Gaetan Laborde are doing this time around – the former is even having his best-ever season in terms of goals. The likes of Richarlison and Dominic Calvert-Lewin are amongst Everton’s best players, and Genesio would perhaps be the man to help them to return to the peak of their powers amid the Toffees’ struggles this term.

With Rennes third in the Ligue 1 table and well-placed to secure a return to the Champions League, it would surely be exciting for fans to see someone of Genesio’s ilk take charge. However, it is hard to see him swapping the north of France for the banks of the Mersey. And perhaps that would be a blessing in disguise for the Toffees.

Lampard is a young manager who took over a side clearly devoid of confidence, and while the negatives have perhaps outweighed the positives so far, there have been enough impressive displays to indicate he can get a tune out of this squad given time.

Joining any side halfway through the season presents particular challenges, and as long as Everton do not drop down to the second tier, he will have achieved his objectives for this term. Next campaign is when he should truly be judged.