Conte has been speaking to Sky Italy (via Sky Sports) about Tottenham’s activity during the transfer window, which saw them ship out four first-team players either on loan or permanently, but then only managed to replace half of them.

Rodrigo Bentancur and Dejan Kulsuevski were Spurs’ only new recruits and it took until Deadline Day for them both to arrive, however, it’s the outgoings that have seemingly frustrated Conte the most, with the Italian commenting: “Four players left in January – four important players for Tottenham. Two have arrived, so even numerically, instead of reinforcing yourself you may have, on paper, weakened.”

Thomlinson believes it is a bleak sign of things at the club that Conte is bemoaning the departures of the likes of Giovani Lo Celso and Tanguy Ndombele, who racked up a measly two starts in the league under the Spurs boss, so the Italian clearly didn’t think they were up to the standard required when they were at his disposal. 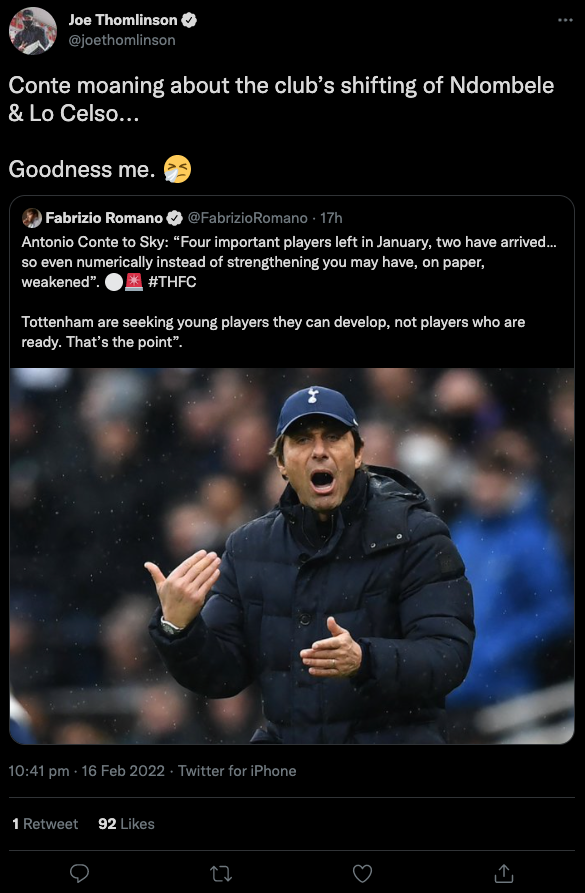 It makes sense that Spurs moved on players that weren’t featuring under Conte, so for him to label them as ‘important’ players is a bit bizarre, as if they were that crucial, he presumably would have played them more often, which could lead to a lot of people thinking the same way Thomlinson is – showing no sympathy and a slight confusion over the comments.

While Conte may have given his blessing for the club to move on those players that left in January, it may well have been with the expectation of replacing all of them, but to only receive two players in January is likely what’s seen him come out with those explosive comments.

In other news: ‘Has just been brought to my attention’ – Sky Sports man reacts as shocking Spurs image emerges