Bryan Gil was sent out on loan last month after failing to nail down a starting role at Tottenham Hotspur, but his time on loan at Valencia doesn’t appear to have changed anything.

The Spaniard has featured in two games for Valencia, starting one. However, despite coming off the bench in their recent match, being introduced at half time to replace Helder Costa, Spanish news outlet ElDesmarque scored him a 2/10 for his performance.

Has Gil flopped at Spurs? 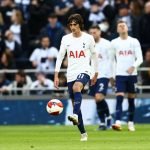 Gil was signed in the summer by former manager Nuno Espirito Santo for £22.5 million, but it’s safe to say that his move hasn’t worked out, with zero league starts and one goal involvement across all competitions.

ElDesmarque summed up Gil’s performance with a very brief but damning claim, saying: ‘He entered the 45th by Hélder Costa. Admonished. The 1-1 play was invented. tried with no luck.’

He lost possession a whopping 20 times in just 45 minutes of action (as per SofaScore).

Gil being sent out on loan by Conte – a manager who didn’t sign him – may seem like a move that could signal the end of his Spurs career already, but reports have suggested that he is still part of the club’s plans moving forward, which should give him some extra motivation to prove himself out on loan.

However, if he continues to put in 2/10 performances, then it may not be long until Spurs start to rethink why they brought Gil to the club if he can’t perform in either the Premier League or La Liga, where he first caught their eyes.