Newcastle United: George Caulkin reveals how amazing it is what’s going on behind the scenes

George Caulkin has been speaking on Pod on the Tyne about what’s going on behind the scenes at Newcastle United that is making him happy.

What the Newcastle fans and the rest of the Premier League see now is a million miles away from what it was like under Mike Ashley as the fans didn’t like the previous owner, their manager or what they were seeing on the pitch.

Will PIF bring silverware to Newcastle? 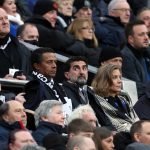 Now, the Magpies are a unified club with their new owners attending all of their matches, visibly overjoyed when they win games and the fans are in love with their club once again, which is obvious to see by how quickly they are selling out home games.

Partly referencing a recent article he wrote for The Athletic, Caulkin revealed what has changed behind the scenes that is making him very happy.

He said: “One of the nice things that we heard whilst doing this piece was that the teams are working together within the club. So in other words, Howe and his backroom staff are working very closely with the ownership team.

“Now, when we think about the club and the last decade and more, the club has been reduced to separate cliques, almost. It’s been Mike Ashley and Lee Charnley, it has been whoever the manager is, it’s been the fans in another corner, players at war with everybody.

“People are working together, we are getting that feeling in the stadium on a matchday – I still have to pinch myself about that – but within the club, they’re working together and that is just so good to hear.”

It’s obvious to see that these new owners are doing all that they can to unite the club and its fanbase after more than a decade of a fractured and frosty relationship, and it’s just the simple things like attending the women’s team games, sending a new year message and donating regularly to the local food bank that seem to be making all the difference.

With this kind of effort off the pitch, it’s transpiring onto it, with the club getting out of the bottom three for the first time in months and recording three successive victories for the first time since 2018, giving themselves a great chance of beating the drop.

In other news: Spotted at SJP: Journalist claims January signing is already getting ‘frustrated’ at Newcastle