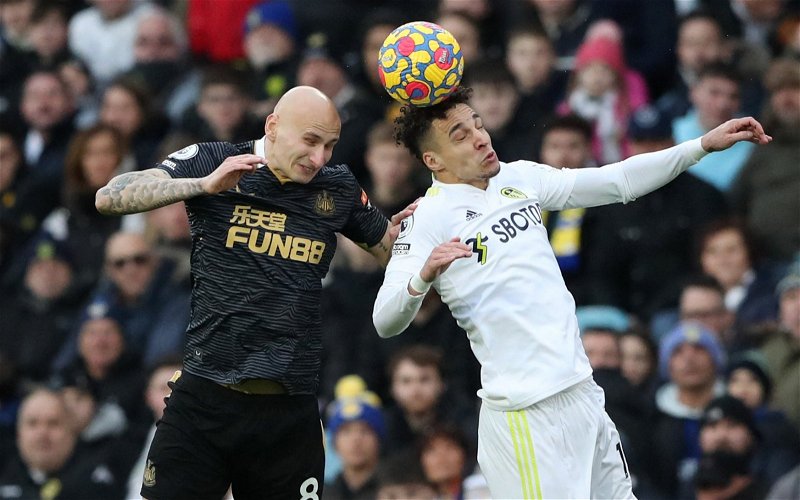 Lots of Leeds United fans have flooded to Twitter to share their anger with the performance of Rodrigo in their shock defeat on Saturday afternoon.

Rodrigo started the game for Bielsa and lasted the full 90 minutes playing in behind the lone striker, but the only thing he had to show from the game was a yellow card (via Transfermarkt).

Should Rodrigo be sold this month?

Defeat against a struggling Newcastle United side saw Leeds’ gap to the drop zone reduced to just seven points, bringing Marcelo Bielsa’s side back down to earth after an impressive win last weekend against West Ham United.

The victory for the Magpies was just their second of the season, and having failed to even find the back of the net against the Toon’s dreadful defence, these Leeds fans were clearly furious with what they witnessed from Rodrigo, who was described as “awful” and a player who “should be sold”.

“Rodrigo awful. I never slate. But Hjelde should played LB, Dallas would if helped in midfield”

@LyricalBen
“Rodrigo has been atrocious. Roberts just doing what he usually does”
@Albertlufc
“That was 90 min of waste of ball possession & good spurts from Harrison & Rafinha. You can’t win if you don’t finish. Rodrigo should be sold last window. Striker is needed.”
@manplanyen
“Rodrigo what a waste of space”
@gelhardtfan
“Tyro just why? Also Rodrigo not good enough”
@Manicgavinski
“Honestly Rodrigo is one of the worst players I’ve seen at this level.”
@Tickets_1
“Rodrigo is absolutely appalling”
@TonyWood73

The Spaniard was making his return to the starting XI after a recent injury issue which had kept him out for over a month, with a brief cameo to his name last weekend against the Hammers (via Transfermarkt).

However, with Bielsa looking elsewhere for goals with Patrick Bamford still out of action, it was apparent the display from the 30-year-old did not impress these fans as he failed to add to his two league goals this season.

Having given away the ball 16 times and lost six duels (via Sofascore), it’s little wonder that these Leeds fans weren’t impressed with Rodrigo today.

In other news: ‘Keep the good news coming, Philip’, ‘Gets better and better’ – Many Leeds fans buzzing over contract claim