Celtic fans have been reacting to comments that have emerged from defender Christopher Jullien on social media.

The French defender has been away from the Celtic side since December 2020 when he suffered a pretty serious injury to his knee.

However, he has slowly been on the comeback trail and is approaching the final stages of his recovery before he can be considered for first-team football once again.

Celtic boss Ange Postecoglou has stated: “He’s had a couple of little setbacks but we are hoping now that he’s at a point where he’s ready to train fully with the team and make himself available. He’ll be a great addition.”

Jullien recently completed that return to training, with the club posting pictures of him on their social media accounts, and the defender decided to join in with the good vibes as he did the same on his Twitter page alongside the message: “For sure 2022 will be a brighter year for me… So I’m wishing you all my people a bright and healthy year 22. Now let’s go!”

The message caused a flurry of Celtic fans to flock to the post to share their excitement at seeing him go one step closer to the first team once again:

@maccageezer
“Yaassss Superman”
@henrik_67
“So glad to see you back. Hopefully fitness returns fully and we see you back in team soon.”
@ticgran
“Great to see you back in training Chris. Looking forward to seeing you back on the pitch.”
@4trebles
“Superb stuff”
@Shaunmcd21
“This makes me happy”
@iamgillT
“It’s a beautiful day and I can’t stop myself from smiling”
@c_mcareaveyx
“Awesome”
@DonnyReila 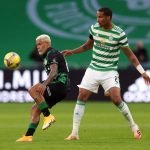 Let’s just hope his injury hasn’t had too much of an effect on him and he doesn’t fail to live up to the hype when he comes back.