A whole host of Celtic fans were very excited to see the latest news regarding Jota.

The Portuguese winger has recently spent time back in Portugal with his parent club Benfica to receive medical treatment during the SPFL’s regular winter break, but Jota has now returned to Celtic’s training ground, as per Football Scotland’s Mark Hendry. 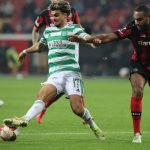 Meanwhile, The Daily Record has reported that Celtic are trying to seal a deal for Jota this transfer window to turn his loan deal into a permanent one as they have a clause in his contract to sign him for a set amount.

A lot of Celtic fans are excited on Twitter that Jota has returned to the club.

“Surprise surprise the king is back”

“I promise am no crying x”

“I am shaking rn. We are back baby”

“Hurry up @CelticFC and get him signed”

Jota has very much impressed since he arrived on loan over the summer with eight goals and six assists across all competitions, so it’s no surprise that these Celtic fans are happy to see him back and hopeful he will sign permanently.

In other news: ‘Excited’, ‘Gonna be an absolute revelation’ – Many Celtic fans buzz over behind-scenes clip