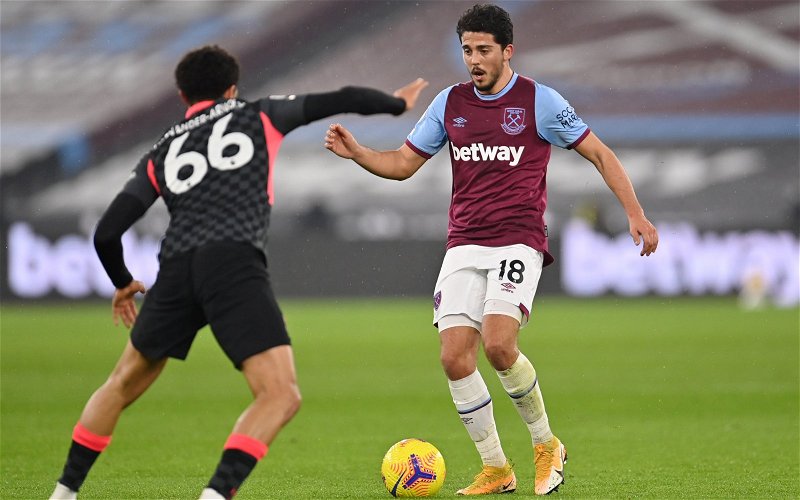 West Ham United are likely to be without a few players for their FA Cup tie this weekend, according to the West Ham Way, but the Hammers are welcoming back a key player.

In an exclusive scoop released on the podcast’s Patreon page, West Ham Way insider ExWHUemployee did not reveal the names of the players that will be missing for the game as of yet, but did drop the news that Pablo Fornals is available to return after missing the last two Premier League games.

The FA Cup draw could have been kinder to the Hammers, who entertain fellow Premier League side Leeds United at the London Stadium on Sunday.

Ex delivered the following update ahead of the game: “West Ham are likely to be without a couple more players this weekend due to testing positive.

“It is unfair for me to name names at this point, but it means our already depleted first team squad will have further challenges. Pablo Fornals, however, should be able to return from the virus.”

Obviously, if the number of positive tests are greater than expected, then the game could be postponed anyway.

While the identities of those potentially missing out were not revealed, with some players already out for West Ham such as Kurt Zouma and Angelo Ogbonna, the last thing they need is more players becoming unavailable. And, the fact that the Hammers are set to play three games in the next 10 days certainly doesn’t help their cause, with two of these coming in the Premier League as they continue to chase a top four spot.

However, a slight positive if the game goes ahead is the return of Fornals to the side. He has been a regular this season when available, making 18 appearances in the Premier League this term. He has been involved in seven goals in that time via four goals and three assists, so David Moyes will be glad to have him back in his plans.

In other news: can you get full marks in our latest West Ham quiz?