Tottenham Hotspur correspondent Alasdair Gold has been speaking on his latest YouTube video to discuss a potential late January swoop for Weston McKennie.

The Lilywhites have been linked with the midfielder throughout this transfer window, however, Gold feels a deal is more likely to gather pace over the summer, despite strong links between the American and Spurs chief Fabio Paratici.

Do Spurs need a new CM this month? 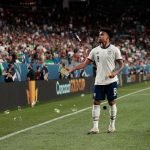 With less than a week remaining in the January transfer window, the Lilywhites find still themselves in search of the central midfielder believed to be on Antonio Conte’s wishlist.

Spurs are believed to have four positions in mind to improve upon this window, with Conte aiming to bring in a new right wing-back, a centre-midfielder, a striker and potentially a centre-back.

However, with just a matter of days to open their account in the January window, Gold did not provide a particularly encouraging update on their interest in McKennie.

He said: “If you’re not aware of him – 23-year-old USA international, Paratici loves him, he took him from Schalke to Juventus, was it 2020? It wasn’t that long ago at all.

“I would say, though, despite that love for him from Paratici – and I believe Paratici’s spoken with his representatives this month – I think that would be a struggle to get him away from Juventus this month.”

TIF Thoughts on McKennie to Spurs…

Reports are heavily linking Spurs with potentially losing three of their midfielders this month in Giovani Lo Celso, Tanguy Ndombele and Dele Alli.

And if all three are to depart this month, surely Conte would be hoping to see at least one midfielder come through the door?

McKennie has been a regular feature for Juventus this season having made 17 appearances in Serie A alone, in which he has been able to net three goals (via Transfermarkt).

And with this in mind, we feel there would be a lot of work to be done by the Spurs board to prise the American away from Juventus with just days remaining in the window, which we find difficult to imagine happening.