Sevilla defender Diego Carlos, who has been linked with a move away this January, may have dropped a clue as to where his future lies, after it was discovered that he follows Tottenham Hotspur on Instagram.

This comes following claims from journalist David Ornstein, who reported in The Athletic that amid strong links to Newcastle United, an unnamed Premier League club has made a ‘major’ offer to Sevilla for the services of Carlos.

It is understood the club in question is a London-based club, but not Spurs’ north London rivals, Arsenal.

While it appears Carlos follows a few current and former Spurs players, it should perhaps be noted that there are links between his country and current club, with Bryan Gil and Sergio Reguilon both former Sevilla players, while Erik Lamela moved there in the summer. Meanwhile, Lucas Moura and Emerson Royal are both compatriots of his, while it is unknown how long Carlos has been following Antonio Conte’s side. 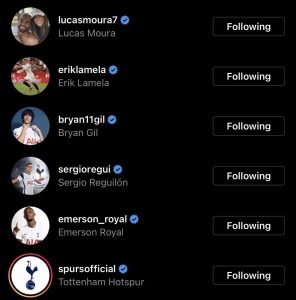 While we can’t look into the players too much for obvious reasons, the fact he seems to follow the Spurs official account is incredibly interesting.

If you couple this with Ornstein’s claim that a London-based club has come in for him, then there could be legs in this one!

This would be a huge blow to Newcastle, who have been trying to sign him for the majority of the window…