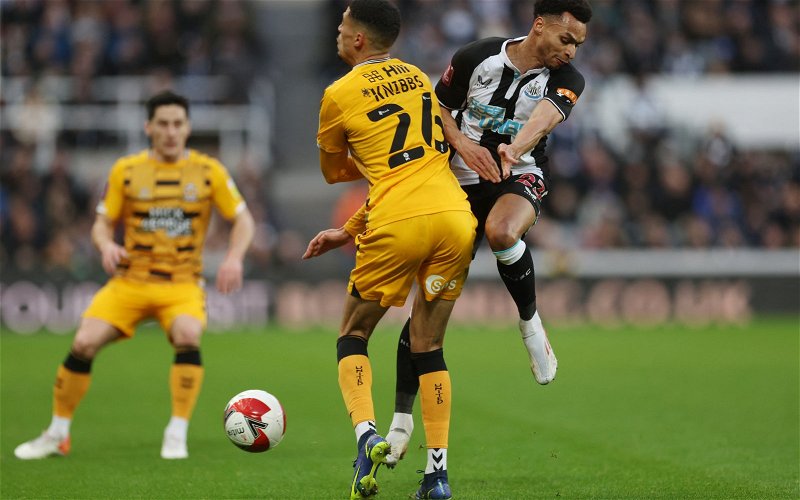 Newcastle United suffered a humiliating FA Cup third round defeat to League One strugglers Cambridge United at St James’ Park this afternoon after a second half goal from Joe Ironside settled the tie in the visitors’ favour.

Jacob Murphy was one of the players singled out for a hammering by some of the Toon Army, but let’s face it, losing at home to a team two divisions down normally means that a whole host of players could be singled out for woeful performances.

Has Jacob Murphy been a flop for Newcastle?

The outrage at Murphy was clear on social media, with these Newcastle fans taking to Twitter to voice their frustrations at his display, which one labelled as that of a “Championship level player”.

“Jacob Murphy has been stealing a living for the last 5 years #NUFC.” @Sam22Maverick

“Jacob Murphy will never score a goal ever again.” @MarkMazzocchi

Despite a return of just four goals in 47 games since the start of 2020/21, Murphy played in a front three in a strong team fielded by Eddie Howe, but he was unable to add to that tally this afternoon.

While he was unlucky to have a goal ruled out for offside and tested the Cambridge goalkeeper on occasion, he will still be disappointed not to have come away with his name in lights on the scoreboard. Indeed, Shields Gazette reporter Dominic Scurr gave the 27-year-old a lowly five in his player ratings, writing that Murphy “was a threat but should have found the net”.

Today’s result was certainly embarrassing but the silver lining could be that the Magpies can now focus purely on Premier League survival. In order to make that happen, though, Howe needs more from the likes of Murphy than what he produced today, especially in the absence of the injured Callum Wilson.

In other news, Many Newcastle United fans reacted to this Premier League survival boost