It has been widely reported that Newcastle are in for a centre-back and after being knocked back by Lille for Sven Botman, they are now turning to Diego Carlos, with Sky Sports confirming that the Magpies have lodged a second bid for the defender. 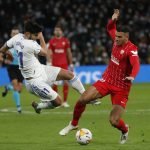 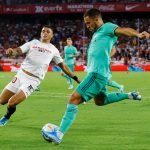 Sevilla may well be unwilling sellers given they’re pushing Real Madrid for the La Liga title and competing in the Europa League, however, according to claims from Víctor Fernández about Carlo’s future (as per Spanish outlet COPE via NUFC360): ‘Sevilla doesn’t want to sell Diego Carlos, but there is a concern in the club. The player is being tripled in salary and Diego Carlos is squeezing.’

A lot of Newcastle fans are buzzing with these comments on Twitter.

“hopefully we can actually get him”

“That’s more like what we need to be hearing”

“Add 5 million and get him on the plane now”

“We now know player definitely wants to come. This amount of money would be huge for him and his wife and children Newcastle would offer him”

If Newcastle want Diego Carlos to play against Watford on Saturday, they’ll have to get a move on as the deadline to register players is midday on Friday, so it would appear unlikely – but they could still progress this deal heading into next week.