Journalist Jamie Jackson has been speaking on Transfer Gossip Daily about the situation between Newcastle United and Jesse Lingard.

Newcastle are set to be very busy in the final days of this transfer window, with just two players having arrived thus far in the form of Chris Wood and Kieran Trippier, while the likes of Dele Alli, Diego Carlos and Lingard continue to be linked. 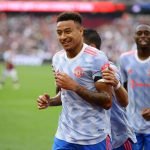 The latter has not started a single Premier League game for Manchester United this season, that is despite his red-hot form for West Ham  United last campaign, and that has seen the Magpies lodge a second bid for the midfielder, with a £10 million loan fee said to be on the table, according to 90min.

Jackson claims that despite the Red Devils recently rejecting a bid for the midfielder, the situation with Lingard could change quickly as the end of the transfer window nears.

“Lingard, I did a story saying last week sometime, a couple of days ago that United had rejected the loan bid, let’s say, from Newcastle. But that can change because of what we’re talking about so yeah, let’s wait and see.”

If reports are true that the Magpies have lodged a £10 million loan bid for Lingard, then it would appear a crazy offer on paper, however, with the midfielder’s contract set to expire in the summer, this would essentially be Man United’s way of securing the closest thing to a transfer fee, while also allowing Lingard to assess his options over the summer when he would become a free agent.

Lingard proved to everyone last season what he’s capable of when he ended up scoring nine times and registering five assists during a remarkable loan spell at West Ham, so if Eddie Howe can get the same tune out of him, the midfielder could well be a catalyst in getting Newcastle out of the bottom three.