A large number of Leeds United fans have taken to Twitter to show their delight at the latest update to surface on Patrick Bamford’s injury status.

It has been a difficult campaign for the England international, with injuries bringing his regular game time to a halt, with just six appearances in the Premier League (via Transfermarkt).

Would you start Bamford on the weekend? 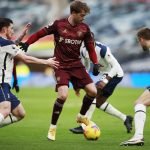 However, according to reports, the striker has recovered from his hamstring injury and is contention to feature in Leeds’ FA Cup clash against West Ham United at the weekend.

Having struggled in the absence of the striker and his goals for the large majority of the 2021/22 campaign, these fans flocked to the update on Twitter to share their delight.

@ConnorMOT92
“Oooh, hope this is true”
@MarchingoutLUFC
“Great that he’s fit but give him another week …… no interest in cup, it’s all about the league.”
@Rubthedub
“Thank goodness paddy’s back”
@JamesGr71556785
“Lovely stuff!”
@BarneyLUFC21
“Hope Marcelo is reading this thread’
@lightnineddy
“Wouldn’t risk playing him . Fa cup isn’t important.”
@richwalker794

If Bamford is to play this weekend, it will be just his second senior appearance since September, with two separate injuries hindering the striker’s season (via Transfermarkt).

With 17 goals to his name last term, it is no surprise these fans are delighted to hear of his return given their second-highest scorer this season is Jack Harrison on just three goals – albeit many do not want him risked in the cup.