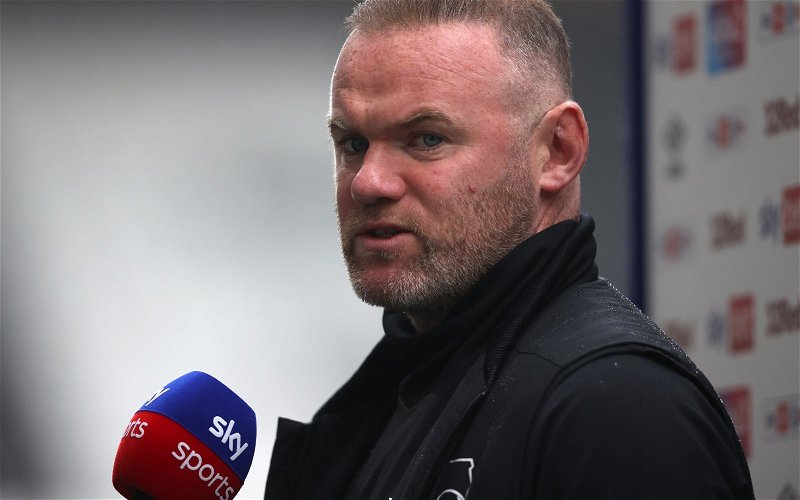 Greg O’Keeffe has been speaking on the All Together Now podcast about how Wayne Rooney may not do well at Everton.

The Toffees are currently on the hunt for their seventh permanent manager under Farhad Moshiri with Rafael Benitez being relieved of his duties on Sunday, and despite Roberto Martinez being an early frontrunner for the job, two other candidates have emerged.

Who would be a better manager at Everton?

According to The Telegraph, Rooney and former England teammate Frank Lampard are set to have interviews with Everton over becoming their new permanent manager, with the former currently working miracles at Derby County, while the latter has been out of work since January last year.

Everton have since appointed Duncan Ferguson as caretaker boss for a second time.

Speaking prior to that announcement, O’Keeffe believed Rooney should avoid being lured into the permanent role on offer at Goodison Park, saying he was not convinced that the Rams boss would be a good appointment as manager.

He said: “I feel strongly that Rooney would be a bad idea. I’ve got some admiration and respect for what he’s doing at Derby in difficult circumstances, and clearly, he looks like he’s got a good managerial career ahead of him. But at this stage in that career, I think he would get chewed up and spat out by Everton.”

TIF Thoughts on the next Everton manager…

This would be quite a swift appointment if it just came down to Lampard or Rooney, however, given that the former flopped as Chelsea boss when he was handed money to spend and then Rooney has only ever managed at the seemingly doomed Derby County in the Championship – where there is no expectation or pressure on him because of their points deductions – there is absolutely no guarantee either would succeed at Everton.

Rooney may well be a more appropriate move for the Everton board, not only because of his connection with the fans and club during his playing days, but also because he has been working in a relegation battle this season with a much thinner squad than the one at Goodison Park, so he could potentially bring a mentality required to get them out of immediate trouble.

In other news: ‘I’m hearing’ – Big name has allegedly ‘been in touch’ with Everton