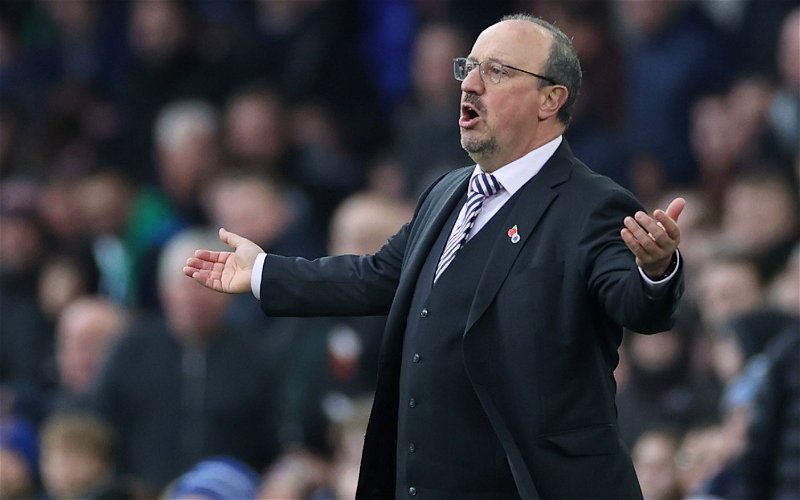 George Caulkin has been speaking on the latest episode of Pod on the Tyne where he mentioned speaking to former Everton manager Rafael Benitez.

The former Toffees boss was never a favoured appointment at Goodison Park, with some Everton fans putting up signs and banners outside the club’s stadium before his appointment to signal their discontent against him.

Who would be a better manager at Everton?

Benitez still decided to take the job and ultimately failed miserably, with the Spaniard winning just one of his last 13 league games in charge before he was sacked and replaced on a temporary basis by Duncan Ferguson.

Speaking on Tuesday’s edition of the podcast, Caulkin, who spent a lot of time with Benitez from his time managing Newcastle, got in touch with the Spaniard following his departure.

“I spoke to Rafa this morning, by the way, and obviously very disappointing. It sounds like Everton’s been every bit as dysfunctional as Newcastle was under Mike Ashley.”

The former Everton and Newcastle manager may now see his reputation tarnished slightly having failed so badly at Goodison Park, and after having refused to leave Everton for Newcastle after Steve Bruce was sacked, he may well be regretting not leaving of his own accord.

Everton are in a very difficult position right now, with Farhad Moshiri seeing his side – which he’s pumped over £500 million into since arriving – sitting only a few points above the drop and no permanent managerial appointment seemingly imminent.