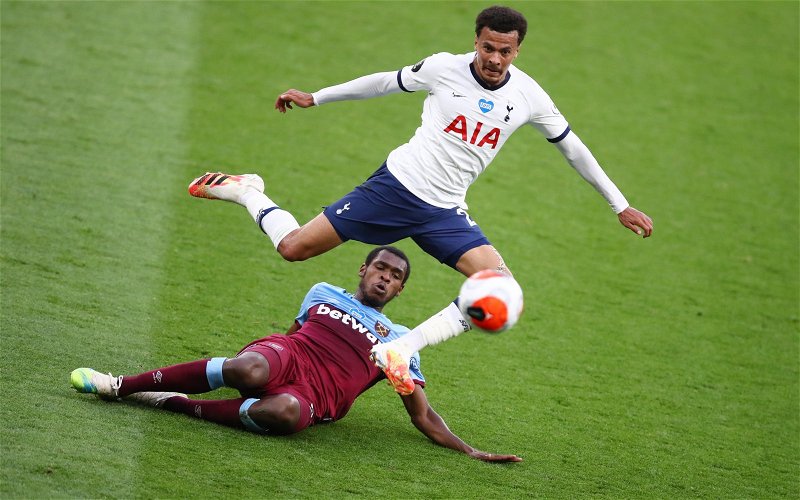 West Ham United presenter Gonzo has been speaking on the latest YouTube video on the Hammers Chat channel about potential interest in Dele Alli.

Reports have emerged recently claiming the Hammers are monitoring the 25-year-old’s situation, with his future in north London under speculation.

Would you like to see Dele at West Ham?

Dele recently made a cameo display against David Moyes’ side in the midweek Carabao Cup clash against the Lilywhites which saw Antonio Conte’s men progress to the final four.

However, it has not been plain sailing for the Englishman over the last few seasons, with his appearances coming few and far between, although he did impress at the weekend against Liverpool.

With his future not far from certain and reports linking the likes of Newcastle United and the Hammers to the midfielder, Gonzo had the following to say on the idea.

“So anyway, apparently us and Newcastle are the interested parties. Now, this is a really, really interesting one. Actually, from a player’s point of view, I think David Moyes would love this player, I really do.

“Now, Moyes would like him because he works really, really hard. He is technically quite good. I mean, he’s an 8/10 technically. I mean, he’s not Lionel Messi but he’s pretty good. He’s a really good size as well, I think he’s 6’1″ – something like that. Athletic, doesn’t stop running. He’s almost got all the attributes you need to be a footballer.”

It was only a matter of months ago when we saw West Ham bring an out-of-form player back to life in the Premier League with Jesse Lingard during his brief loan spell.

With this in mind and Dele’s recent display against Jurgen Klopp’s side, it could be a possibility that could interest the Hammers as they near the second half of the season.

However, the biggest sticking point, for us, is the notion of Daniel Levy looking to deal with the Hammers given their recent emergence at the top-end of the table.

West Ham would be hoping to strengthen their side with Dele, so why would Levy look to help the Hammers as they aim to battle Spurs for a spot in next season’s Champions League?