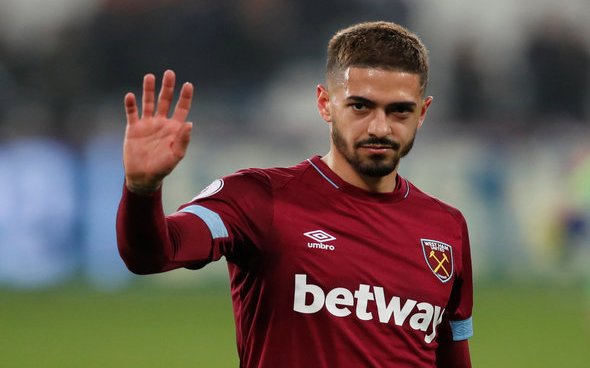 Gonzo has been speaking on the Hammers Chat YouTube channel about how happy he is that Manuel Lanzini is set to stay at West Ham United.

The Hammers enjoyed a bright start to the season, but have struggled in the Premier League lately, having won just once in their previous seven league matches which has seen them lose ground on the top four teams.

Some slightly more positive news has come out recently via TEAMtalk, as Lanzini is not going to be leaving in January, which could be great news as he may play a bigger role when Said Benrahma departs for the Africa Cup of Nations.

Gonzo is delighted to hear that Lanzini looks set to stay at West Ham despite reported interest from elsewhere and claims he was ‘growing agitated’ at the London Stadium.

“With the Africa Cup of Nations coming up and Said Benrahma going off, I was really pleased to see that the club have come out and they’ve said Lanzini is going nowhere. Lanzini is going to stay and see out his contract. And quite right, too.”

It may be quite surprising to see that Lanzini is willing to stay at West Ham as he is clearly not a favourite under David Moyes anymore, with the likes of Pablo Fornals, Said Benrahma and Jarrod Bowen having been handed more minutes than him.

Lanzini has only started three games in the league this season, so it would not have been strange to see him express a desire to leave as he’s 28 years old now and potentially entering his peak years as a footballer, but given he’s wanting to stick around, unless the club are merely holding him to his contract, it shows he must have a true love for the club and will obviously save West Ham from shelling out for a replacement in January if he does stay.