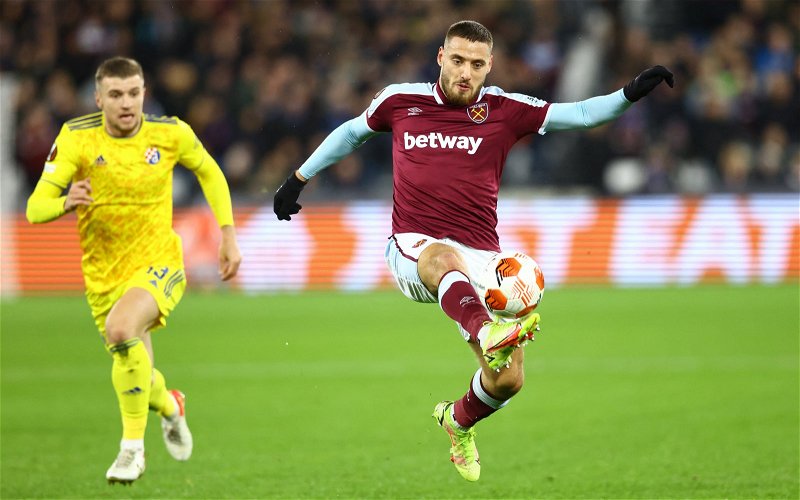 Geo has been speaking on the Hammers Chat YouTube channel about how Nikola Vlasic is yet to impress at West Ham.

The Hammers started the season in fine form and that has helped them be able to sit inside the top four as the league heads into the January transfer window soon, but they have struggled lately in most games for wins, consistency and goals.

This could be mainly down to the fact Michail Antonio has only scored once in his previous 11 league games but David Moyes seemingly intends to stick with the club’s only recognised striker, despite having players such as Jarrod Bowen and Vlasic, who was signed over the summer for £27 million, who can operate through the middle and thus, hand Antonio a rest.

Geo believes that Vlasic has not had the desired impact many were hoping for at West Ham so far.

(13:49) “I think people’s frustrations with Michail is greater than ever before and that is as a result of inadequate transfer spending in the summer. We’ve got Vlasic there who is a bit of an elephant in the room and was probably brought in to replace Jesse Lingard in theory, but he hasn’t replaced Jesse Lingard.

“He might do later on down the line, he might not and it might not work out for Vlasic, but it might. We’ll have to wait and see but currently, it hasn’t and currently, he hasn’t replaced Jesse Lingard.”

It appeared to be a smart piece of business over the summer to bring in another attacking option having failed to land Jesse Lingard on a permanent basis and Vlasic was coming off the back of an impressive season with CSKA Moscow which saw him net 11 times in 26 league matches.

However, some warnings signs may have been right in front of the Hammers when they were buying Vlasic for such a hefty amount of money as the Croatian has already failed to impress in the Premier League once before with Everton when he spent one season at Goodison Park and failed to score in the league, so his time at the London Stadium may go the same way if he can’t impress Moyes.

In other news: ‘This actually helps West Ham’ – Presenter claims WHU have ‘an advantage’ to sign £10m-rated ace