Many Newcastle United fans have been reacting to comments that have emerged from Sean Longstaff following their recent draw in the Premier League.

Part of the reason they were able to pick up a draw during the game was down to the performance of Joelinton.

He was all over the place against Manchester United, in a good way; he had two shots, completed 78% of his passes, completed four tackles, made three interceptions and won one aerial duel on his way to a 7.26/10 rating (via WhoScored).

This led teammate Longstaff to stick up for the Brazilian in his post-match interview, as he stated (via Keith Downie): “The disrespect he gets is a disgrace – some of the noise from outside is so disrespectful. He’s the best player in training every day.”

When the quotes appeared on Twitter, it led to a number of fans slamming his Sky Sports colleague Patrick Davidson, who started off the interview by saying to Joelinton (via TEAMTalk) “I didn’t realise you was that good”:

“@SkySports need to apologise that’s disgraceful, just shows they hate us up north!”
@boldonallotment
“Personally I thought that interview was immensely condescending and the while line of questioning was unprofessional. It was a brilliant performance from Joelinton, typical of recent games but I was cringing throughout the whole interview.”
@GeordieSpirit
“Absolute shambles of an opening line”
@_DavidGarnett
“Total disrespect from sky”
@Robbie59303961
“The person who interviewed Longstaff and Joelinton should be held to account for that opening line. Absolutely appalling behaviour”
@MrDunnPE
“Couldn’t agree more. That is the ultimate definition of the word ‘Condescending'”
@npjy83 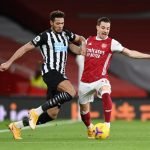 In fairness to Davidson, given how Joelinton’s time at the club has been so far, with 11 goals and eight assists to his name, he hasn’t exactly been lighting things up at St. James’ Park so far – but perhaps he could have worded the question a little differently.

Quiz: Did you spot these 8 things from Newcastle v Man United?