Former Premier League striker Glenn Murray has been speaking on the latest episode of Match of the Day 2 to discuss Newcastle United’s display at the weekend.

Eddie Howe’s side were unable to continue from where they left off against Burnley as they found themselves on the receiving end of a heavy defeat against Leicester City on Sunday.

Is Joelinton good enough for NUFC? 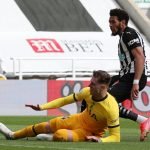 Martin Dubravka found himself picking the ball out of his net on four occasions at the King Power Stadium at the weekend as the Toon remain three points adrift of safety.

And it was the display of the forward Joelinton which left Murray furious in his analysis of the game as the Brazilian made his 15th appearance of the league campaign.

Speaking on Match of the Day 2, Murray slammed the 25-year-old for not tracking back in the build-up to Leicester’s third and Youri Tielemans’ second goal of the afternoon.

He said: “See Joelinton here getting caught in the eight position with his hands on his hips in possession. And then it just shows, I mean, Youri Tielemans, he just breaks, shows desire, power to get into the box and he gets his just rewards for making that lung-busting [run] and he picks up 17 yards on Joelinton.

“That, for me, is just unacceptable. Joelinton does get caught in the eight, which is not normal for him. But you’ve still got to react to where you are on the pitch.”

It has been another underwhelming start to the campaign for the Brazilian in terms of his output in front of goal, with just the one strike in his 16 appearances across all competitions (via Transfermarkt).

However, performance-wise, there does seem to have been an improvement from the 25-year-old since the arrival of Howe in the St. James’ dugout.

But given the £15.3m-rated ace has struggled in front of goal since arriving on Tyneside, we do not think it would not be unreasonable to ask of more from the Brazilian defensively.

Given the position Howe’s side find themselves in, we think it is crucial each individual is pulling their weight in the side, and it appears Joelinton’s defensive efforts may have to improve if he is to retain his spot in the starting XI.

In other news: ‘I know for a fact’ – Insider reveals 26 y/o ace ‘Howe is very keen on’ signing in January