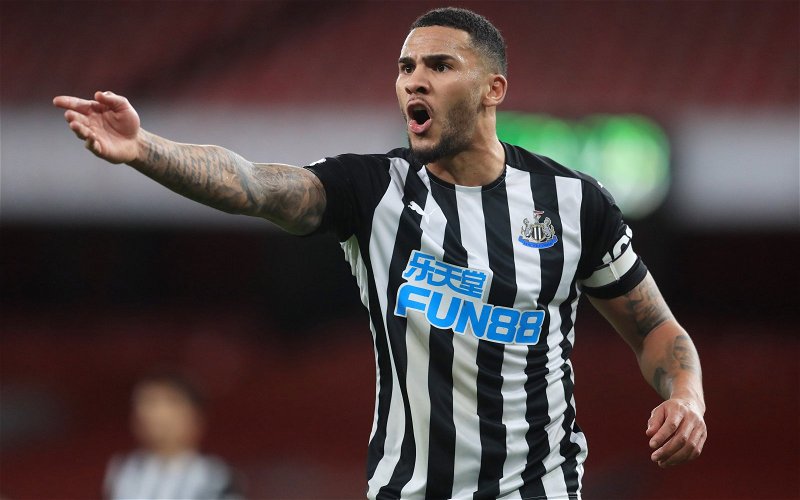 Ahead of the the Toon Army’s clash against Sean Dyche’s side at St. James Park in the Premier League on Sunday, manager Eddie Howe has lauded defensive ace and club captain Jamaal Lascelles. Lascelles, who missed the 1-1 draw against Norwich earlier this week through suspension, is a player who believes he can help ‘take his game to new heights’/

The former Bournemouth (via Chronicle Live): “He’s a hugely important player because he has physicality and pace in our back line and they’re qualities we need.

“I really like Jamaal and I think there’s a lot more to come from him. I think we can take his game to new heights.”

What did these Newcastle fans make of Howe’s comments on Lascelles?

“New heights? He’s been absolutely woeful for the past 2 years. This season in particular, his performances have been shambolic. Huge improvements needed”

“Pace??? Nah, Howe has his conversation mixed up somewhere there”

“2 players are on PL level…..Dubravka and Wilson…all the others are just not good enough…..Howe will be a magician if we stay up”

“It’s contradicting to what we see on the pitch. We know it’s your duty to protect your players but we need defenders who aren’t error prone. Just start Fede”

Ever since his arrival at St. James Park from Nottingham Forest in 2014, Lascelles has endured a mixed spell on Tyneside, hailed for his leadership qualities but also criticised for his lack of consistency for the Toon.

Whether Lascelles is recalled to the first XI by Howe remains to be seen, but victory against Dyche’s side would see the Magpies draw level with Burnley and fellow Premier League strugglers Norwich City on 10 points in the table as the Magpies aim to seal a crucial three points and kickstart their campaign.