Journalist Nick Ware has given his thoughts on the future of Lucas Digne at Everton following recent reports about him and Rafael Benitez.

The French defender has been a pretty prominent member of the Everton side in recent seasons, racking up 127 appearances since his arrival from Barcelona in 2018, proving himself to be pretty useful in an attacking sense, as he’s managed to bag six goals and 20 assists during his time at Goodison Park.

However, he has found himself out of the squad for the past two games against Arsenal and Crystal Palace, with a report from The Athletic claiming that “he was omitted after his already fractious relationship with Benitez took another turn for the worse”, adding that: “It is understood they had a disagreement in Spanish… ahead of the all-important match, which resulted in Digne being excluded altogether from Monday’s group.”

Reports in Spain have suggested that he could be on his way out of the club in January, with a number of teams showing an interest, but speaking on a live video for Football Insider, Ware didn’t think that Everton would allow him to leave in January, mainly due to how tough a task it would be to replace him.

He said: “I can’t see him going in January, to be honest, because again, Everton would have to have someone lined up straight away. They were linked to a Ukrainian left-back yesterday, but those reports are still unconfirmed at the moment, so quite how they would replace him with a few weeks to go into the window…

“If you’re an Everton fan as well, you wouldn’t trust the board to sort of replace Digne with someone better. Even though he hasn’t been great this season, replacing someone like that is a tough task, especially with the budget Everton might have.”

Do you think Lucas Digne has been poor for Everton recently? 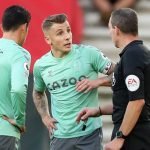 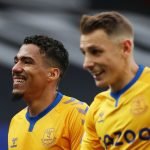 It does sound as if Digne’s time at Goodison Park is coming to an end, because if he isn’t getting along with the manager and is finding himself out of the team, then the writing is very much on the wall for him, especially if there are teams willing to take him off Everton’s hands.

But Ware is also right when it comes to bringing in a replacement. Ukrainian football news outlet Zorya Londonsk has claimed that Everton are looking at Dynamo Kiev defender Vitaliy Mykolenko, and whilst they do have Ben Godfrey, who has filled in at left-back on occasion, they would surely be more suited to having someone who is a more natural fit in that position rather than a makeshift central defender.

So getting a replacement in has to be their priority before they can allow Digne to leave, otherwise they could find themselves stretched heading into the second half of the season.

In other news: ‘His whole body language’ – Journalist has ‘real problems’ with Everton man