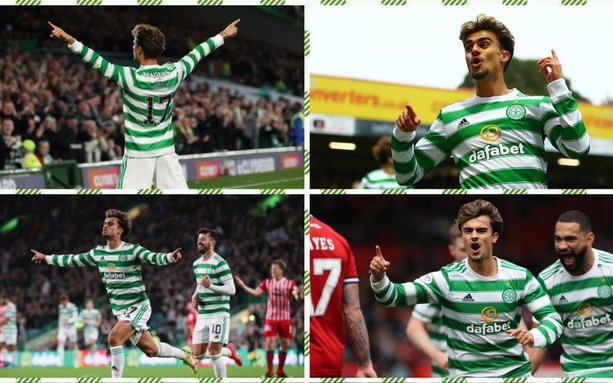 Celtic booked their place in the Scottish League Cup final after a workmanlike 1-0 win over defending champions St Johnstone at Hampden Park.

Celtic had substitute James Forrest to thank as just minutes after his introduction, he broke the deadlock and St Johstone hearts, who had defended resolutely.

Despite not actually getting involved in the goal himself, Paul John Dykes highlighted the ‘unplayable’ Jota on Twitter after the game.

And then, speaking on A Celtic State of Mind Podcast after the game, Dykes added: “He was Man of the Match tonight. He was absolutely astonishing down the left-hand-side; he’s got a bag of tricks. I think a lot of these criticisms that he’s getting is that he’s going down too easily. I don’t see that, I think he goes down when he’s impeded and he’s maybe calling for it on his way down as he did in the first half. But I just think that he is an absolute game changer the impact he’s made has been astonishing and he’s a fans’ favourite.”

Not only does he praise Jota, he defends him from the criticism he’s been getting. It’s always tough for attackers when there’s contact in and around the box. If they’re fouled but manage to stay on their feet then the referee doesn’t give it all the time. If they go down and get the decision they’re deceiving the referee… Maybe the officials need to start giving decisions when players do stay on their feet but are fouled?

The news today that Celtic are looking to make the move permanent in January for the £3.15m-rated Portuguese star will be music to the ears of Dykes and any Celtic supporter you’ll meet.