A collection of Celtic fans have been left in awe after seeing footage of Jota pull off a remarkable piece of skill in their recent game.

In their last outing, the Bhoys faced St. Johnstone looking for a place in the Scottish League Cup final. It was a tight affair coming up against the tournament’s most recent winners, and James Forrest’s second-half effort ended up being the telling moment of the game which ended 1-0.

However, despite the pressure of the occasion, Celtic’s Portuguese winger pulled off a moment to wow the fans when he raced forward into a promising area.

Twisting and turning in the opposition’s penalty box, he opted to do a rabona as he crossed the ball to the far post. In the end, St. Johnstone just about cleared the ball away, but he’d impressed the crowd nonetheless. 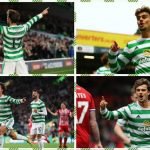 Footage of the incident was captured and shared online, where it was met with much pleasure by many Celtic supporters.

@marktarditi
“Forgot all about that. Frightening.”
@Cpark1996
“Cheeky.”
@JohnMatchett6
“What a talent.”
@Jordanstagramm
“Outrageous.”
@_JR67
“Deserved to be a goal.”
@SenorCeltic
“Best thing I’ve seen on a football pitch”
@matthew_sellik

During the summer, Celtic signed Jota from Benfica on a season-long loan. Having evidently impressed in his time with the club so far, it now looks as though the Bhoys want to make the deal a permanent one as soon as possible.

Fortunately, he had an option-to-buy clause inserted in his contract, reported to be in the region of £7m. With the fans so impressed by this latest display of talent, they’ll likely want the winger to stay at their club for longer than just the season.