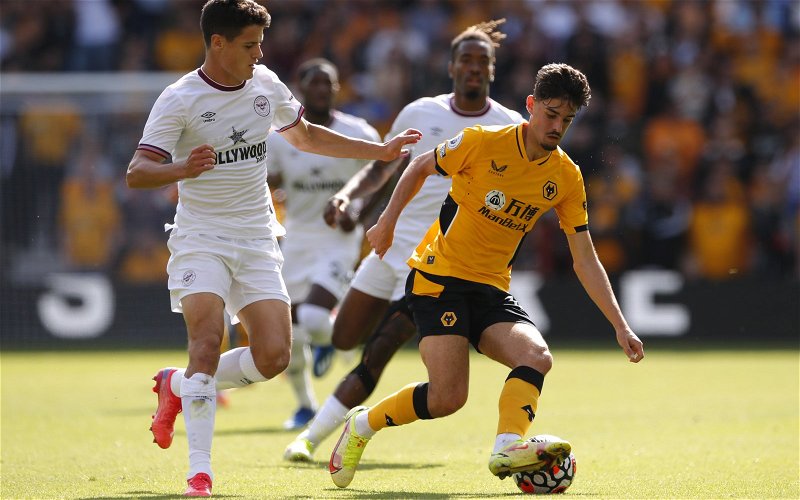 Wolves journalist Liam Keen has provided an update on Francisco Trincao following reports made about his future.

The Portuguese winger, who was signed this summer from Barcelona on a season-long loan, has been a pretty regular member of the first team so far this season, making nine appearances under Bruno Lage, only managing to bag one goal in the process.

However following some changes at Camp Nou, he could be about to find himself on his way back to his parent club. According to reports in Spain, newly appointed Barcelona boss Xavi has expressed his desire for him to return to Spain in the January transfer window as he looks to build the side in his own image.

Speaking on the E&S Wolves podcast, Keen explained some of the details behind the loan deal and what would need to happen for Trincao to move back to Barcelona:

(32:44) “So there’s no January recall clause in that deal. So essentially, all the cards are in Wolves’ hands really, they hold all the chips they’ve got all the leverage in this deal. Barcelona will have to come in and negotiate a return for him if they wanted Trincao to come back. At this point in time there’s no suggestion that Wolves are going to entertain it at all, really.

(33:34) “But as it stands, Trincao is happy and wants to stay, unless Barcelona negotiate something that is difficult for Wolves not to turn down, which you’d imagine would involve some sort of compensation or some sort of fee because Wolves have got that that deal locked in for it, then he’ll be going nowhere.”

Have you been impressed with Trincao so far this season?

Given the struggles that Barcelona are going through, as they currently sit 9th in La Liga and with reports circulating (Catalunya Radio, via AS) that Sergio Aguero might have to retire following his recent incident, you can certainly understand why Xavi might want the 21-year-old Trincao to come back to the club as he needs all hands on deck to get them out of the mess they’re in.

And with his return so far this season, or lack thereof, you can make the argument that Wolves should allow him to move back to Spain, take any money that they get from the deal and use it to reinvest in someone that might have more of an impact on the side.

But with over a month to go until the window opens, there’s still plenty of time for things to change. Trincao’s form could get better or even worse, and Barcelona might be given a new lease of life under their new boss and decide that they don’t need him. It certainly should be an interesting deal to watch as January gets closer and closer.

In other news: ‘Player of the season so far’ – Journalist wowed by ‘reliable’ 24 y/o WWFC ace