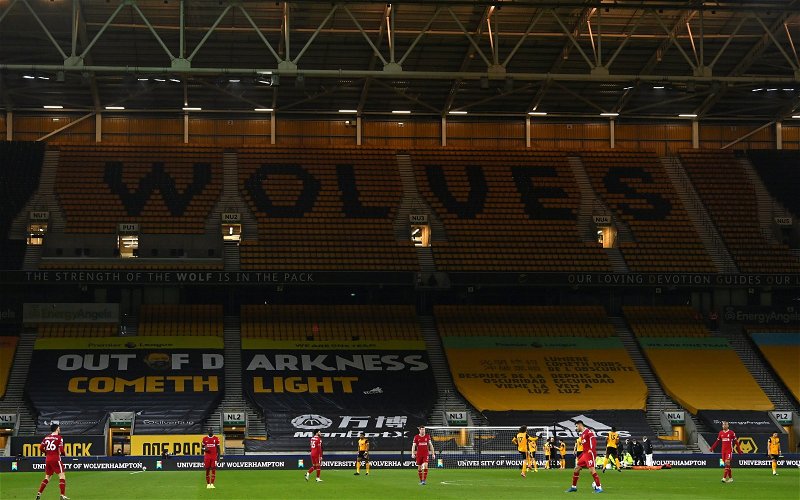 Football finance expert Kieran Maguire has been discussing Wolves and the current financial situation at Molineux.

Wolves certainly made an impact during their first few seasons back in the Premier League. Not only did they manage to finish 7th and qualify for the Europa League during their first season since their most recent promotion, but they managed to do well in that competition, too, making it all the way to the quarter-finals before falling to eventual champions Sevilla.

They spent a lot of money along the way in order to make that happen, and in doing so, they were found guilty of breaching UEFA’s Financial Fair Play (FFP), which brought them a number of punishments including threats for what would have happened if they’d have won the competition and qualified for the Champions League in 2020/21.

Speaking on the latest edition of The Price Of Football podcast, Maguire broke down the differences between the Premier League’s FFP rules, – which allow clubs to lose up to £105m over a three-year period – and UEFA’s FFP protocols, which limit clubs to €30m (£25.4m) of losses within three years.

He also explained the impact that it was having on Wolves, specifically in relation to their punishment from UEFA, Fosun and their handling of it, as well as their current financial situation.

Maguire said: “This is where I think they are being hampered to a certain extent. As part of their settlement with UEFA, they agreed to commit to the UEFA limit for 2021/22, which is the present season.

“So whereas your club and my club [Crystal Palace and Brighton], if our owners so decide, we can go up to £105m limit, Wolves are effectively committing themselves to the €30m limit.

“Now, you might say, ‘well, that’s a price for success’, because you are going to get the benefits of the additional money arising as a result of qualifying for European competition, but it does hamper them to a slight extent as well.”

As Maguire points out, Wolves are essentially paying for the success that they enjoyed in previous seasons as it means that they are having to work on something of a budget in the present day, as is best demonstrated by the drop in spending that they have encountered in previous seasons – and why they could be forced to sell Adama Traore in the coming months just to try and generate some cash to spend elsewhere.

However, it hasn’t necessarily caught up to them this season, as they have made a promising start under Bruno Lage, with the Old Gold currently sitting 6th in the Premier League table. So whilst they might be suffering now, at least in terms of finances, they could be set for rewards further down the line.

If they are able to qualify for Europe again and gain the extra revenue that playing there brings, then they should be able to get out of the situation that they are currently in and spend that money next summer. So hopefully they can make that push for European football, as that way, they won’t be forced to sell players and instead keep them together to build for the future.