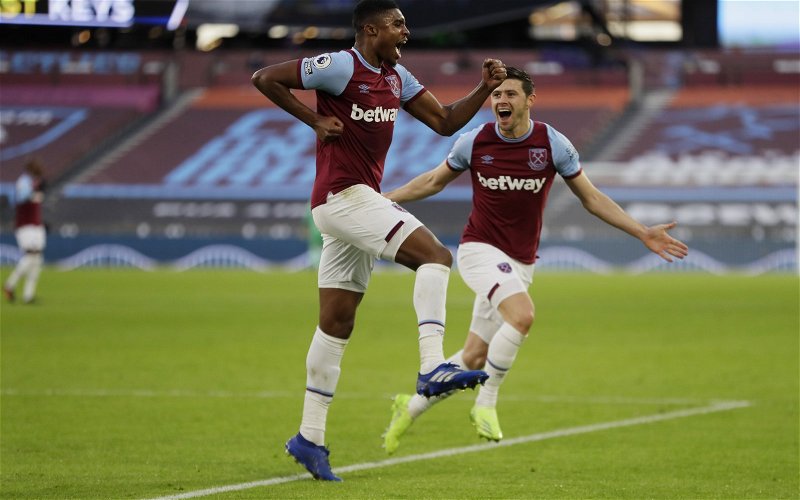 West Ham United insider ExWHUemployee has claimed that the contractual situation of Hammers youngster Ben Johnson is nothing to be concerned over.

Over the past few weeks, Johnson has excelled in a high-flying West Ham team. His form was summed up in his last outing when he cut inside to score the opener with his left foot as his club swept aside Aston Villa 4-1 in the Premier League.

Before that, he had also played the full 90 minutes in wins over Everton and Tottenham Hotspur, where he helped his team keep a clean sheet on both occasions.

Johnson’s run in the team could well have fans worried about his contractual situation, as it comes to an end next summer (according to Transfermarkt).

However, while speaking on The West Ham Way podcast, ExWHUemployee claimed ‘there’s nothing really to panic about’ as the defender has a two-year extension on his current deal that can be triggered by the club.

He said: “Ben Johnson, I often get asked what his contract situation is. Well, I checked it out with the club and he does have a two-year automatic trigger extension.

“So at a minimum, the club could trigger that and he’s got two more years after this year. So there’s nothing really to panic about.

“But what I think might happen is that because of the level of his performances, the club might go in and say, ‘well, we’ve got that two-year [option], let’s add on a third, let’s add three more years to that, make it a five-year deal and let’s get you tied up for the long term future’, like they did with Declan [Rice].”

With Johnson being at the club for a number of years, coming through the academy, David Moyes will likely be delighted to have a first-team option who hasn’t cost him a penny.

However, if the Hammers want to go down the Declan Rice route, as ExWHUemployee suggest they might, they could have to fork out a decent wage to keep him at the club for the long term.

Indeed, Rice is reportedly on around £62,000 a week but has turned down new offers – presumably worth a lot more – to keep him tied to the side.

Still, if West Ham want to go down the cheaper route to keep Johnson, that extension they can trigger will likely not come at a great cost, considering he has only recently broken into the senior team on a regular basis.

In other news: “It just comes naturally” – Pundit in awe of £100m-rated WHUFC pair who “play so well together”