A whole host of Tottenham Hotspur fans were buzzing on Twitter to see the latest Dusan Vlahovic transfer claim to emerge.

With Antonio Conte now at the helm, he and Fabio Paratici will work together on transfer dealings – and with both men having spent a large amount of time in the Serie A, it’s only natural to see a lot of players from the division linked with a move to north London, as hinted at recently by Fabrizio Romano. 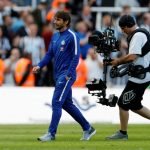 One striker who took Serie A by storm last season and is now linked with Spurs is Vlahovic. The Serbian striker netted 21 goals in 37 league appearances and according to Ryan Taylor, journalist for the Daily Express, Spurs are the only Premier League club with a serious interest in the striker.

The fact that he has used the word ‘serious’ might be because Sky Sports Italia has claimed that Spurs’ rivals Arsenal were interested, but that Vlahovic’s agent was not answering any calls from the Gunners, which will delight Tottenham fans.

A lot of Spurs fans are delighted on Twitter to see this Vlahovic claim.

“Things you love to hear. He’s massive. Like van Nistelrooy circa 2002. We have to have him”

“such a gargantuan institution”

“We are not here to take part”

Vlahovic has been proving to people that last season was not just a one-off in front of goal, as he’s already scored eight goals in 12 league matches, including a hat-trick against Spezia and a brace against Atalanta – who have run Manchester United close twice in the Champions League.

Spurs may well be looking for a strike partner to play alongside Harry Kane – or if the striker’s horrendous run of form continues this campaign, potentially someone to replace the England captain – as he has just one goal in 10 Premier League games this season, and that came against winless Newcastle United.