A collection of Tottenham Hotspur fans have expressed their fears after journalist Alasdair Gold explained Antonio Conte’s understanding of the club’s transfer plans.

According to the Football.london writer, the club’s freedom to spend (or potential lack of it) in the upcoming transfer windows has been clearly explained to the Italian manager.

Would you take Luka Modric Back at Spurs? 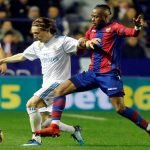 In a recent article, he explained: “From what I’ve been told, Conte was made fully aware of what the club can and can’t do when it comes to money. They are on a more even keel now after losing £150m of revenue during the pandemic and that debt is spread long-term rather than in short-term loans.”

The information was shared by Twitter page The Spurs Express and the revelation soon had many supporters rather concerned.

“And here come the excuses already… managers don’t come here for projects, they come here for huge payouts… rather spend money on managers than BIG players.”

@Myke_88
“Deja vu.”
@tt_5__
“Here we go again.”
@N17Ryan_
“Oh god I hope this isn’t the start of them now saying we won’t do any business in the winter cause of no funds.”
@Celticspain17
“I hope he walks if he doesnt get the monex needed, when will the people at the top realize that players like winks sanchez dele etc will take us absolutely nowhere”
@Ndombolo20
“Having Conte in charge was great while it lasted.”
@PHaytread
“It’s Tottenham, it’s enic, it’s levy it can only be seen as a negative. Mourinho said the same things, with the same group of players and look at how that worked out.”
@HawkwellGreenU7
“Here we go …its starting again …propaganda in place”
@tmasunga13

It’s clear to see these fans are fearing some sort of falling-out between club and Conte if the new manager is not given enough financial backing.

The Italian, of course, left former side Inter in the summer after having a row with his superiors when he found out the club would not be able to invest in key new players and would in fact sell their best stars.

This could all lead to a recipe for disaster. However, if Conte has been communicated with clearly, at least he won’t be handed any major transfer surprises.