A lot of Tottenham Hotspur fans have taken to Twitter to voice their excitement at the latest claim to emerge regarding new manager Antonio Conte.

According to Spurs correspondent Alasdair Gold, there is a belief inside the club that Conte will be changing the formation from a 3-4-3 to a 3-4-1-2 over the coming weeks.

He said: “There’s an expectation within the club that the starting XI and formation will change over the coming weeks. I think the width from the wing-backs negates the need for wingers up front as well, so I think we’ll see a shift to a 3-4-1-2.”

Will Conte lead Spurs to a trophy? 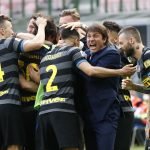 The Italian was appointed as the replacement for Nuno Espirito Santo last week and has seen his side win in the Europa Conference League and draw in the Premier League already.

With the international break now bringing a halt to domestic action, the 52-year-old will have to wait just under two weeks until Spurs take to the field again on 21st November against Leeds United.

Spurs fans flocked to Twitter as Gold’s claim was relayed, particularly to the delight of these fans, who were clearly excited at the prospect of a 3-4-1-2 formation.

In Conte’s first league game in charge of Spurs, the Italian fielded a 3-4-3 formation as the Lilywhites were held to a goalless draw against Rafael Benitez’s Everton.

And it is apparent from these replies that these Spurs fans would love to see this reported alteration, with some hoping this formation would see a more prominent role in the squad for Tanguy Ndombele.