Tottenham Hotspur fans have been waxing lyrical after an incredible stat emerged regarding defender Cristian Romero following his impressive start to life at N17 and in the Premier League.

The 23-year-old, signed by the Lilywhites on a season-long loan from Serie A side Atalanta this summer, has become one of the first names on the team sheet for Spurs this campaign, and will be hoping to become a key player under newly appointed manager Antonio Conte.

Now, according to South American Data site Sudanalytics, Romero is the central defender with the most successful actions and the most defensive duels won per 90 minutes within the top 5 major leagues so far during the 2021/22 season. 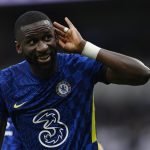 “Keeps on impressing more and more”

“One of the best Centre Backs in Europe yet he gets 0 recognition online because he plays for Tottenham, the bad team form with Nuno and Dier being at fault for conceding goals at the back overshadows just how good he is. Build the defence around him in January”

Romero is currently away on national duty with Argentina, who take on fierce rivals Brazil in their next World Cup qualifier on Tuesday as they seek to reach the Qatar 2022 version of the competition.

The 23-year-old will subsequently return to Spurs, who next face Leeds in their next Premier League match against Leeds United on Sunday 21st November at the Tottenham Hotspur Stadium.