Exclusive: Tottenham legend feels a defender has to be a transfer priority for Conte

Conte was named as Tottenham manager on Tuesday and got off to a positive start in the Tottenham Hotspur Stadium dugout after seeing off Vitesse in the Europa Conference League a couple days later.

However, Spurs showed their defensive frailties that night after conceding two goals in a 3-2 win. 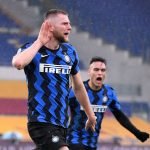 There is obviously a lot of work for Conte to do, and Roberts thinks that includes fixing the Tottenham defence.

“We need another centre-half,” the ex-Spurs player said to TIF in an exclusive interview. “I think [Cristian] Romero is brilliant, but he needs somebody like Conte had at Inter. He needs a really tough centre-half that doesn’t give goals away. We give goals away all the time.”

One centre-half that Tottenham have been linked with in the past is Milan Skriniar, who played under Conte at Inter.

As per the MailOnline, the north London club have had a long-standing interest in the Slovakia international, so perhaps that is something they could revisit in January or next summer to help Conte improve the defence.

Until then, the Italian will have to try and get the best out of the likes of Romero, Eric Dier and Davinson Sanchez.