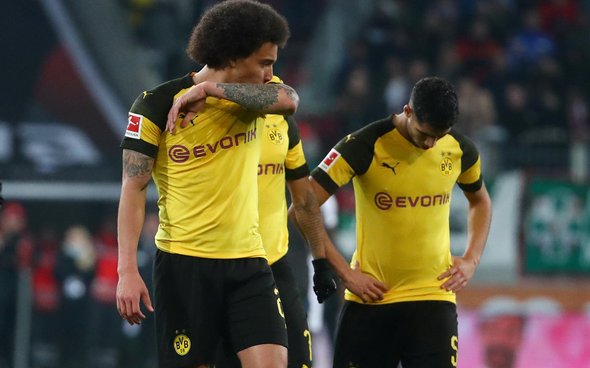 Newcastle United fans will be struggling to keep up with the constant new transfer links given their newfound wealth. New names are coming up on a daily basis and it’s almost impossible to keep up with!

Three more players that the Toon have been linked with are Axel Witsel of Borussia Dortmund and Inter Milan duo Marcelo Brozovic and Stefan de Vrij. All three of those players would undoubtedly add unreal experience to the current Toon side and would become arguably three of the best players Eddie Howe would have at his disposal.

Newcastle United journalist Harry Roy dropped his opinion on the news via the Tyne Warp Podcast: “The two players from Inter that we’re linked with are Marcelo Brozovic and Stefan de Vrij, and from Dortmund, it was Axel Witsel. Witsel came from Liam Kennedy, and the other two were I think in the Times I want to say. I feel a lot of it is just agent talk, but let’s not beat around the bush here. All them three players walk into Newcastle’s team like they are top European talents. Can you see them sort of players coming in January? Because a sort of part of me is like, Well, yeah, we are the richest club in the world, and then the other part of me is, well, we’re 19th in the league in a relegation battle. Are these players going to swap European football for for Newcastle?”

That clearly is the big question; will these top players join a relegation fight rather than a fight for European football? Money certainly talks, so Newcastle will have a chance of marquee signings in January.

If the players are happy to just downgrade to a relegation fight for money, you have to question their desire. Will they be focussed on helping progress the club, or is it just a payday for them? If it’s the latter, the performances may not be good enough and relegation could be on the cards.