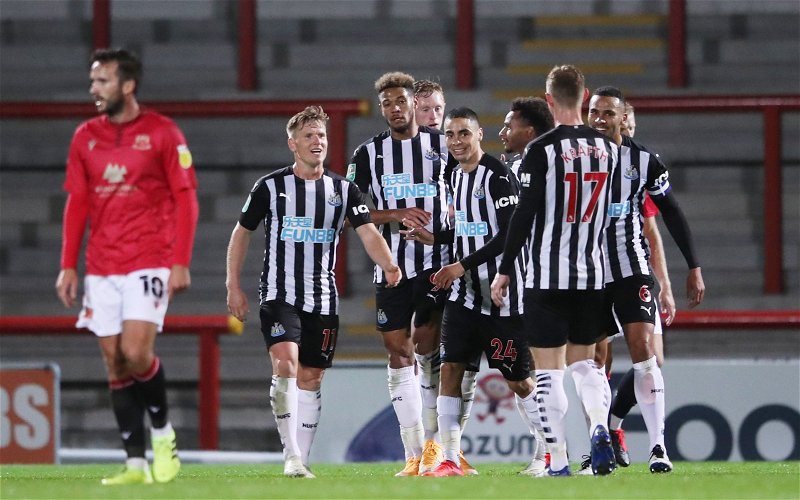 Newcastle United’s 1-1 draw with Brighton & Hove Albion saw the Magpies climb off the bottom of the table on goal difference.

Leandro Trossard gave the hosts the lead after 24 minutes, only to be pegged back by Isaac Hayden shortly after the hour mark. Callum Wilson looked set to wrap the points up for the visitors, but Robert Sanchez cleaned him out before he could slot into an open net. The Brighton ‘keeper was sent off, but Newcastle couldn’t capitalise in the dying stages.

Despite moving off the foot of the table, Newcastle remain the only side in the Premier League without a win 11 games into the campaign. Something a new manager has to change swiftly if they are to retain their Premier League status at the end of the campaign.

“He [Hayden] scored today but wow, his last goal was against Chelsea which was before the first lockdown. He’s abysmal. Willock comes in when Hayden is injured and scored 7 in 7. Hayden is Championship level at a push.” @WellayeWillock

“Sack Jones start completely fresh. His tactics, his line-ups have been awful. All that money spent on Willock to sit on the bench against Brighton #nufc.” @DanToon4Life

“I’m absolutely shocked Willock did not get on. Why on earth don’t we shoot with a free-kick and Ritchie on corners was useless. Robbed of three points.” @steveo_NE

“We should’ve sold him [Hayden] when we had the chance.” @DanneMedSkagget

“Hayden and Shelvey in midfield is too defensive.” @MMAGHIE

The absence of Joe Willock is surprising given his impact last season. He was a key factor in Newcastle’s upturn in form, forcing them to make the move permanent in the summer.

Eddie Howe watched on from the stands as the current frontrunner for the job. Hayden’s goal may have given him something to think about, although the fans seem clear that Willock simply has to play in the future. Despite his vital goal to salvage a point for Newcastle, plenty of fans still seemed far from impressed with the midfielder.