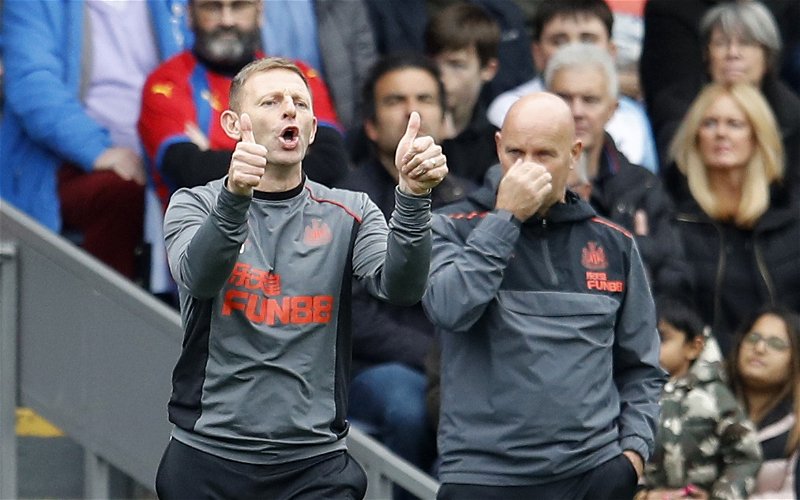 Many Newcastle fans have taken to Twitter after Steve Bruce’s former No. 2 has hit back at accusations the players were on easy street during the 60-year-old’s time in charge at St. James’ Park.

Agnew, as per the Daily Star, has insisted that the departing backroom team were guided by the sports science staff when handing out days off during Newcastle’s poor start to the season.

Agnew said: “As a coaching team, we worked tirelessly in a bid to improve the squad.

“Whether it was on the training pitch, watching videos, analysing data or just discussing tactics, we certainly put the hours in. To say there were too many days off or that the players got off lightly is out of order.

“Whenever we did give them time off, it was only after taking advice from the sports scientists.”

When hearing about this, many Magpies fans have taken to Twitter to voice their opinion on Agnew’s remarks after they were shared online:

What did these Newcastle fans make of Steve Agnew’s remarks?

“If this is what he genuinely believes, thank goodness he’s gone too. Our players’ fitness is a disgrace, Premier League footballers shouldn’t be looking shattered after half an hour each week”

“And yet we were atrocious. Good riddance to them”

“Unbelievable really isn’t it at that level. Embarrassing”

“It was jaw dropping”

“Passing the buck as ever. Did they not notice we were always out on our feet after an hour every week?”

Newly appointed Toon boss Howe will be looking to register his and Newcastle’s first league victory of the campaign when they take on Thomas Frank’s Brentford side at St. James’ Park at 3pm on Saturday, as they seek to really spark their season into action and surge up the league table under the former Bournemouth boss.