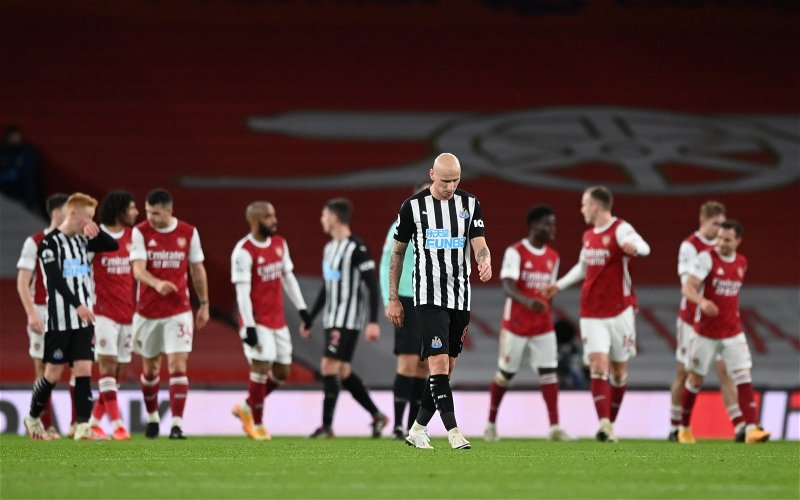 The role of a social media admin is never an easy job, especially with the reaction of fans. One of the hardest admin jobs currently would have to be that of Newcastle United.

Ahead of their trip to the Amex Stadium to take on Brighton & Hove Albion, Newcastle’s official Twitter account shared the staple of any matchday, the ‘matchday graphic.’

This led fans into a meltdown in the replies given the choice of players from the admin. Jonjo Shelvey, Sean Longstaff and Jeff Hendrick were used to advertise the game, much to the disgust of many supporters.

Jonjo Shelvey has already missed a decent amount of fixtures this campaign with a calf injury (via TransferMarket). Despite this, there appears to be a lack of sympathy for the midfielder as he looks to get back to 100% match sharpness.

How Newcastle Fans Reacted to the Matchday Graphic

“Why on earth would anyone in their right mind put a pic of these 3 on a pic to promote today’s game haha! I already wasn’t confident now I’ve given up hope ha.” @kevinmallen12

“Jesus out of all the players to pick, might aswell hoy Ritchie and Lascelles on aswell to complete the Sunday league 5-a-side.” @DL5872

“Probably the worst 3 players at the club.” @Nikos_NUFC

“No danger of any of these 3 getting speeding tickets #nopace.” @Wig82

Graeme Jones will take interim charge for the clash with high-flying Brighton, with three points vital for Newcastle to avoid falling deeper into the drop zone. A first win of the season would be welcomed with open arms by everyone associated with the Magpies, with Premier League survival far from a guarantee, despite a takeover from billionaire owners.

It remains to be seen if the three players in question will play any part between them in the fixture, but it certainly looks like the fans are hoping not!